A Dynamic Theory of Populism in Power: The Andes in Comparative Perspective (Hardcover) 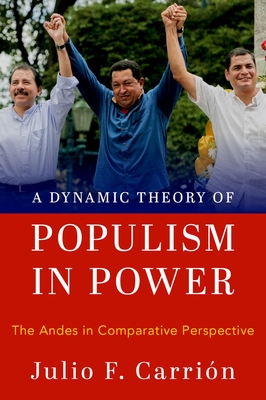 The relationship between populism and democracy is contested among scholars. While some propose that populism is inherently harmful for democracy because it is anti-pluralist and confrontational, others argue that populism can reinvigorate worn-out democracies in need of greater popular participation. In A Dynamic Theory of Populism in Power, Julio F. Carri n advances this debate by examining the empirical relationship between populism in power and democracy. Does populism in power always lead to regime change, that is, the demise of democracy? The answer is no. The impact of populism on democracy depends on the variety of populism in power: the worst outcomes in democratic governance are found under unconstrained populism. Carri n presents the permissive and productive conditions for why and how populism becomes unconstrained, as well as a dynamic theory of change that shows how the late victories of populists build on early ones, resulting in greater power asymmetries. A Dynamic Theory of Populism in Power provides an analysis of five Latin American populist presidencies, all located in the Andes. In four of them (Bolivia, Ecuador, Peru, and Venezuela), populism became unconstrained and regime change followed. In one case, Colombia, populism in power was successfully contained and democracy survived. The concluding chapter places the Andean cases in comparative perspective and discusses how unconstrained populism in other cases (Nicaragua and Hungary) also led to the end of electoral democracy. Where populism in power was constrained (Honduras and the United States), regime change did not materialize. Carri n advances a theory of populism in power that helps us understand how democracies transition into non-democracies. To that extent, the book illuminates the processes of democratic erosion in our time.