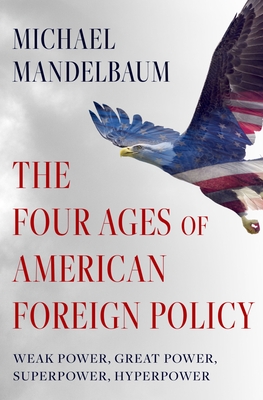 A new and unique framework for understanding the history of the foreign policy of the United States. The United States is now nearly 250 years old. It arose from humble beginnings, as a strip of mostly agrarian and sparsely populated English colonies on the northeastern edge of the New World, far removed from the centers of power in Europe. Today, it is the world's most powerful country, with its largest economy and most powerful military. How did America achieve this status? In The Four Ages of American Foreign Policy, Michael Mandelbaum offers a new framework for understanding the evolution of the foreign policy of the United States. He divides that evolution into four distinct periods, with each defined by the consistent increase in American power relative to other countries. His history of the four periods features engaging accounts of the major events and important personalities in the foreign policy of each era. Throughout, Mandelbaum highlights fundamental continuities in the goals of American foreign policy and in the way that policy was adopted and implemented. He portrays the United States, in its ascent, first as a weak power, from 1765 to 1865, then as a great power between 1865 and 1945, next as a superpower in the years 1945 to 1990, and finally as the world's sole hyperpower, from 1990 to 2015. He also presents three features of American foreign policy that are found in every era: first, the goal of disseminating the political ideas
Americans have embraced from the first; second, the use of economic instruments in pursuit of the country's foreign policy goals; and third, a process for formulating policy and implementing decisions shaped by considerable popular influence. American foreign policy, as he puts it, has been unusually ideological, unusually economic, and unusually democratic. A sweeping and elegantly written history, The Four Ages of American Foreign Policy will reshape our understanding of how the United States became the most powerful nation the world has ever seen.

Michael Mandelbaum is the Christian A. Herter Professor Emeritus of American Foreign Policy at The Johns Hopkins School of Advanced International Studies. He is the author of sixteen previous books, including Mission Failure (Oxford, 2016) The Rise and Fall of Peace on Earth (Oxford, 2019), and, with Thomas L. Friedman, That Used to Be Us (2011).