Phantoms of a Beleaguered Republic: The Deep State and the Unitary Executive (Paperback) 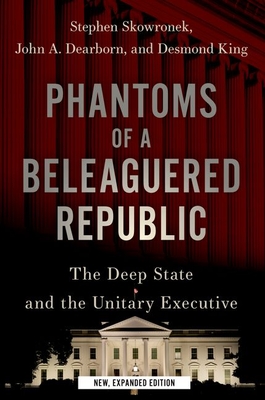 Phantoms of a Beleaguered Republic: The Deep State and the Unitary Executive (Paperback)


Usually Ships in 1-5 Days
A powerful dissection of one of the fundamental problems in American governance today: the clash between presidents determined to redirect the nation through ever-tighter control of administration and an executive branch still organized to promote shared interests in steady hands, due deliberation, and expertise. President Trump pitted himself repeatedly against the institutions and personnel of the executive branch. In the process, two once-obscure concepts came center stage in an eerie faceoff. On one side was the specter of a Deep State conspiracy--administrators threatening to thwart the will of the people and undercut the constitutional authority of the president they elected to lead them. On the other side was a raw personalization of presidential power, one that a theory of the unitary executive gussied up and allowed to run roughshod over reason and the rule of law. The Deep State and the unitary executive framed every major contest of the Trump presidency. Like phantom twins, they drew each other out. These conflicts are not new. Stephen Skowronek, John A. Dearborn, and Desmond King trace the tensions between presidential power and the depth of the American state back through the decades and forward through the various settlements arrived at in previous eras. Phantoms of a Beleaguered Republic is about the breakdown of settlements and the abiding vulnerabilities of a Constitution that gave scant attention to administrative power. Rather than simply dump on Trump, the authors provide a richly historical perspective on the conflicts that rocked his presidency, and they explain why, if left untamed, the phantom twins will continue to pull the American government apart. Now, in this expanded paperback edition, they address the tumultuous Trump-Biden transition and reflect more broadly on the problems of presidential democracy in America today.

Stephen Skowronek is Pelatiah Perit Professor of Political Science and Professor in the Institution for Social and Policy Studies at Yale University. He is the author of The Policy State: An American Predicament (2017, with Karen Orren), Building a New American State: The Expansion of National Administrative Capacities, 1877-1920 (1982), The Politics Presidents Make: Leadership from John Adams to Bill Clinton, (1997), The Search for American Political Development (2004, with Karen Orren), and Presidential Leadership in Political Time: Reprise and Reappraisal (third edition 2020). Among other activities, he was co-founder of the journal Studies in American Political Development, which he edited between 1986 and 2007, and he provided the episode structure and thematic content for the PBS miniseries entitled The American President (Kunhardt Productions). John A. Dearborn is an Assistant Professor of Political Science and the Carolyn T. and Robert M. Rogers Dean's Faculty Fellow at Vanderbilt University. He is the author of Power Shifts: Congress and Presidential Representation (2021). He received the 2020 George C. Edwards III Award for Best Dissertation on Executive Politics as well as the 2020 E. E. Schattschneider Award for Best Dissertation on American Government from the American Political Science Association. Desmond King is the Andrew W. Mellon Professor of American Government at the University of Oxford and a Fellow of Nuffield College, Oxford. He works on racial inequality and the American state, and his publications include Making Americans: Immigration, Race and the Origins of the Diverse Democracy (2000), Separate and Unequal: African Americans and the US Federal Government (2007), The Unsustainable American State (2009, with Lawrence Jacobs), Still a House Divided: Race and Politics in Obama's America (2011, with Rogers M Smith), and Fed Power: How Finance Wins (2016, with Lawrence R Jacobs). He is a Fellow of the Academia European, American Academy of Arts and Sciences, the British Academy and the National Academy of Social Insurance.