Race at the Top: Asian Americans and Whites in Pursuit of the American Dream in Suburban Schools (Hardcover) 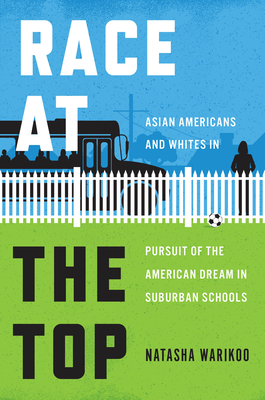 An illuminating, in-depth look at competition in suburban high schools with growing numbers of Asian Americans, where white parents are determined to ensure that their children remain at the head of the class.

The American suburb conjures an image of picturesque privilege: manicured lawns, quiet streets, and—most important to parents—high-quality schools. These elite enclaves are also historically white, allowing many white Americans to safeguard their privileges by using public schools to help their children enter top colleges. That’s changing, however, as Asian American professionals increasingly move into wealthy suburban areas to give their kids that same leg up for their college applications and future careers.

As Natasha Warikoo shows in Race at the Top, white and Asian parents alike will do anything to help their children get to the top of the achievement pile. She takes us into the affluent suburban East Coast school she calls “Woodcrest High,” with a student body about one-half white and one-third Asian American. As increasing numbers of Woodcrest’s Asian American students earn star-pupil status, many whites feel displaced from the top of the academic hierarchy, and their frustrations grow. To maintain their children’s edge, some white parents complain to the school that schoolwork has become too rigorous. They also emphasize excellence in extracurriculars like sports and theater, which maintains their children’s advantage.

Warikoo reveals how, even when they are bested, white families in Woodcrest work to change the rules in their favor so they can remain the winners of the meritocracy game. Along the way, Warikoo explores urgent issues of racial and economic inequality that play out in affluent suburban American high schools. Caught in a race for power and privilege at the very top of society, what families in towns like Woodcrest fail to see is that everyone in their race is getting a medal—the children who actually lose are those living beyond their town’s boundaries.

Natasha Warikoo is professor of sociology at Tufts University. She is the author of, most recently, The Diversity Bargain, also published by the University of Chicago Press.

“An absorbing work of ethnography. . . that looks at the complex power and social dynamics at work in a system where success seems both scarce and an absolute imperative. Strikes a nice balance between academic and popular audiences."
— Chicago Tribune

"As uncomfortable as the question might be, we must ask whether changing demographics in America’s most competitive high schools and colleges will affect our educational values. In a truly postracial society, the answer would be no. But as Tufts University sociologist Natasha Warikoo argues in her new book, Race at the Top, an ethnography of how Asian and white parents approach childrearing, high-school education, and each other in the tony suburban community of Woodcrest', Asian immigrant parents differ strikingly from their native-born neighbors."
— The Hedgehog Review

"[Race at the Top] is particularly good at demonstrating the tensions that stem from striving for achievement, including the resentments and complaints of white families who feel that Asians are displacing them from top positions. This portrait of an educational race to the top is a deep investigation into how parents and communities compete in the zero-sum game of social mobility through education."
— Choice

"[Warikoo] makes an important contribution to the critical study of class-specific processes of racialization in general and the ambivalent role of racism in upper-middle-class liberal milieus in particular."
— Ethnic and Racial Studies

“In communities across the country, white and Asian parents argue over whose style of parenting is naturally better. Rather than consider such either/or questions, Warikoo effectively demonstrates that each group is making strategic choices that best advance their own children. As she passionately writes, the real argument should be how to support the children being left behind.”
— Pawan Dhingra, Amherst College

“This powerful book is a significant addition to our understanding of envisioned pathways to success among Asian American immigrant parents and youth in the US, as well as the continued and contested power of whiteness in the current historic moment. Warikoo underscores key ways in which Asian parents benefit from the historically ‘locked in’ system of race exclusion that makes privileged spaces like Woodcrest possible in the first place.”
— Lois Weis, author of "Class Warfare: Class, Race and College Admissions in Top-Tier Secondary Schools"

“Warikoo’s powerful new book is a must-read for all social scientists of immigration, education, and inequality in the US, as well as for parents who want to do ‘the best for their kids’ while creating an inclusive society. This first-rate analysis will be on course syllabi for years to come.”
— Michèle Lamont, Harvard University

“A vivid portrait of a key class segment of American society; one that has the imprint of an immigrant influence, and that grapples with change as a result of that influence. Race at the Top is a game-changing study that deserves a wide audience.”
— Tomás R. Jiménez, Stanford University

“In this eye-opening book, Warikoo deftly guides us through the difficult waters of race, class, and achievement pressure—and how they intersect—in an East Coast suburb. She brings to this exploration many talents, including the ability to vibrantly convey people's stories and a keen understanding of both parenting and research. This is a very insightful, engaging, and important book.”
— Richard Weissbourd, author of "The Parents We Mean to Be"