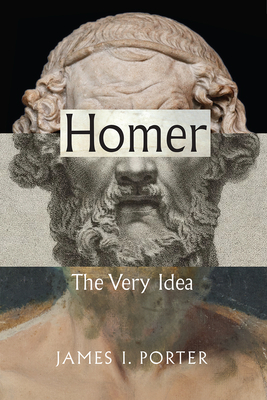 By James I. Porter


Coming Soon - Available for Pre-Order Now
The story of our ongoing fascination with Homer, the man and the myth.

Homer, the great poet of the Iliad and the Odyssey, is revered as a cultural icon of antiquity and a figure of lasting influence. But his identity is shrouded in questions about who he was, when he lived, and whether he was an actual person, a myth, or merely a shared idea. Rather than attempting to solve the mystery of this character, James I. Porter explores the sources of Homer’s mystique and their impact since the first recorded mentions of Homer in ancient Greece.

Homer: The Very Idea considers Homer not as a man, but as a cultural invention nearly as distinctive and important as the poems attributed to him, following the cultural history of an idea and of the obsession that is reborn every time Homer is imagined. Offering novel readings of texts and objects, the book follows the very idea of Homer from his earliest mentions to his most recent imaginings in literature, criticism, philosophy, visual art, and classical archaeology.

James I. Porter is the Irving Stone Professor of Literature at the University of California, Berkeley. He is the author of numerous books, including Nietzsche and the Philology of the Future, The Invention of Dionysus: An Essay on ‘The Birth of Tragedy’, and The Sublime in Antiquity. He has also edited several books and is a coauthor of Postclassicisms, also published by the University of Chicago Press.

"In this spirited book, Porter identifies not one but three Homeric questions. First, when, how and by whom were the Iliad and the Odyssey actually composed (that is, the Homeric Question as we traditionally know it)? Second, how should we interpret the poems? And third, how does Homer work as a figure of the imagination? . . . One example of Porter’s brilliance is his discussion of Homer’s blindness. Neither historical fact nor unquestioned assumption, 'blindness' was a way for ancient readers to discuss the extraordinary vividness of Homeric epic – a quality that made an impression also on later readers."
— Barbara Graziosi

"Porter presents intriguing instances of writers who, in thrall to the beauty of Homer’s poetry, either celebrate or deflect from the actual war carnage described therein. Porter’s book provides not only a valuable introduction to the enigma of Homer and the roads taken down the centuries to solve—or at least better understand—that enigma, but also a number of challenging and eye-opening readings of the texts themselves. . . .  I found that reading Homer through Porter’s eyes was sometimes most enjoyable precisely when our viewpoints diverged. This, in itself, is a sign of a rich and engaging book."
— New Criterion

"Here is a learned tome worth careful examination. Porter presents an original, focused, intelligent analysis of Homer's oeuvre. The style is breathtaking and the range truly impressive. . . . Summing Up: Recommended."
— CHOICE

"Brisk and energetic. Students (and teachers) will find much here to provoke thought and argument about the literary, cultural and moral issues, which find expression and exploration via the pages of this most enigmatic of poets."
— Journal of Classics Teaching

"Porter’s is a fascinating and erudite book with a penchant for striking prose."
— Bryn Mawr Classical Review

"Another book about Homer? No, says [Porter], this one is quite different: he will tease out the sources of Homer’s mystique down the ages, examining the fascination he has cast over posterity since the first recorded references in ancient Greece. There will be nothing about Homer the poet or his supposed historical existence, about the poems’ literary worth or the circumstances of their composition, certainly nothing about heroic society, simply the pursuit of a concept, an idea, a cultural invention of successive ages called ‘Homer’."
— Classics for All

"Porter’s book takes us across nearly three millennia of grappling and wrestling with the idea of Homer—who he was, whether he existed, his deification by his admirers, his de-mythologizing by his critics, and his eternal recurrence again and again and again across space and time."
— Merion West

“Homer: The Very Idea is an extraordinary quest in search not of the elusive Homer but of Homer’s elusivity.  Porter takes up Homer as a phenomenon repeatedly produced over millennia, in different times and places, as the gauzy point of origin for cultural value that refuses to vanish.  By critically engaging the idea of Homer, he delves deep into the very logic of the tradition’s value.  An inimitable tour de force of transhistorical spectrology.”
— Brooke Holmes, author of Gender: Antiquity and Its Legacy

"Porter is an exceptional scholar. Clear, intelligent, and filled with fascinating examples, this book is contemporary while reaching beyond the fashionable, and it will arouse a good deal of discussion."
— Simon Goldhill, author of Preposterous Poetics

“This book is a reckoning with who or what we understand Homer to be and how we have reinvented him for our own ends. Porter makes clear the impossibility of Homer both as a concept and as a person, revealing him as the illusion of a perfectly formed whole that has been kept alive for millennia, a ghost in the machine, a phantom both alive and dead. As a leading scholar in dismantling assumptions about the classical past, Porter has written an original, compelling, and eye-opening book that will generate excitement and admiration.”
— Alex C. Purves, author of Homer and the Poetics of Gesture

"This book is the culmination of Porter's work of two decades on Homer as the history of an idea... it demonstrates the immense potential of the poems and their author to
create new ideas according to the perspectives of their readers."
— The Classical Review