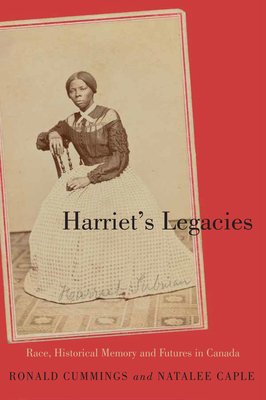 
Usually Ships in 1-5 Days
Historic freedom fighter and conductor of the Underground Railroad Harriet Tubman risked her life to ferry enslaved people from America to freedom in Canada. Her legacy instigates and orients this exploration of the history of Black lives and the future of collective struggle in Canada. Harriet’s Legacies recuperates the significance of Tubman’s time in Canada as more than just an interlude in her American narrative: it is a new point from which to think about Black diasporic mobilities, possibilities, and histories. Through essays and creative works this collection articulates new territory for Tubman in relation to the Black Atlantic archive, connecting her legacies of survival, freedom, and cultural expression within a transnational framework. Contributors take up the question of legacy in ways that remap discourses of genealogy and belonging, positioning Tubman as an important part of today’s freedom struggles. Integrating scholarship with creative and curatorial practices, the volume expands conversations about culture and expression in African Canadian life across art, literature, performance, politics, and public pedagogy. Considering questions of culture, community, and futures, Harriet’s Legacies explores what happened in the wake of Tubman’s legacy and situates Canada as a key part of that dialogue.
Ronald Cummings is associate professor of Black studies at McMaster University. Natalee Caple is associate professor of Canadian literature and creative writing at Brock University.
“This book extends Harriet Tubman’s legacy in Black intellectual, political, and artistic life. In its impressive range across disciplines and fields, Harriet's Legacies asserts Tubman as a still-living presence and inspiration for the work of artists and scholars alike, and it demonstrates how a uniquely Canadian reading of Tubman produces new intellectual paths for our time.” Rinaldo Walcott, University of Toronto and author of The Long Emancipation: Moving toward Black Freedom