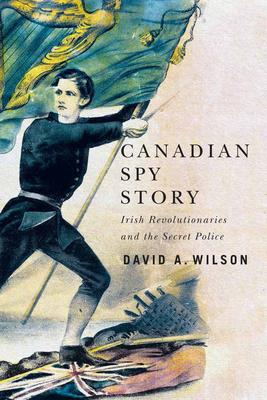 By David A. Wilson


Usually Ships in 1-5 Days
In the mid-nineteenth century a group of Irish revolutionaries, known as the Fenians, set out to destroy Britain’s North American empire. Between 1866 and 1871 they launched a series of armed raids into Canadian territory. In Canadian Spy Story David Wilson takes readers into a dark and dangerous world of betrayal and deception, spies and informers, invasion and assassination, spanning Canada, the United States, Ireland, and Britain. In Canada there were Fenian secret societies in urban areas, including Quebec City, Montreal, Ottawa, and Toronto, and in some rural townships, all part of a wider North American network. Wilson tells the tale of Irishmen who attempted to liberate their country from British rule, and the Canadian secret police who infiltrated their revolutionary cells and worked their way to the top of the organization. With surprises at every turn, the story includes a sex scandal that nearly brought Canadian spy operations crashing down, as well as reports from Toronto about a plot to assassinate Queen Victoria. Featuring a cast of idealists, patriots, cynics, manipulators, and liars, Canadian Spy Story raises fundamental questions about state security and civil liberty, with important lessons for our own time.
David A. Wilson is professor of Celtic studies and history at the University of Toronto, the author of Thomas D’Arcy McGee, volumes 1 and 2, and the editor of Irish Nationalism in Canada.
“Wilson’s academic penchant for detail is admirable … . What’s also engaging and timely is the book’s final chapter. In it, Wilson embarks on a reflective discussion of state security, espionage and the suspension of civil liberties, in times of grave national threat — clearly authored with recent anti-vax, so-called “freedom” protests and the rise of populist extremism in mind.” Winnipeg Free Press

”Canadian Spy Story is brilliant historical scholarship, the profundity of its argument deliberately concealed by its gripping narrative. Wilson waits until the end to reflect on larger questions of civil liberty versus national security that pervade the entire story. This is a masterstroke of storytelling.” Kevin Kenny, New York University

”Canadian Spy Story is an outstanding book by one of Canada’s leading historians - meticulously researched, well structured, and beautifully written. Wilson paints a compelling picture of the twilight world of émigré conspirators, their anger at their plight, their desire to strike back, their resilience in the face of innumerable setbacks, and their doggedness in planning for the great day of liberation.” Thomas Bartlett, University of Aberdeen