The Christianity of Culture: Conversion, Ethnic Citizenship, and the Matter of Religion in Malaysian Borneo (Contemporary Anthropology of Religion) (Hardcover) 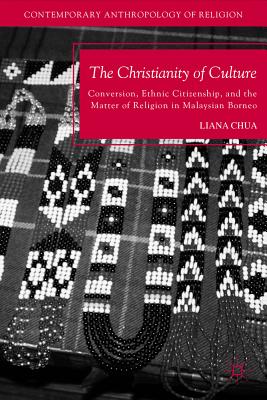 The Christianity of Culture: Conversion, Ethnic Citizenship, and the Matter of Religion in Malaysian Borneo (Contemporary Anthropology of Religion) (Hardcover)


Usually Ships in 1-5 Days
In this richly contextualized study, Liana Chua explores how a largely Christian Bidayuh community has been reconfiguring its relationship to its old animist rituals through the trope and politics of culture. Placing her ethnography in dialogue with developments in the nascent anthropology of Christianity, Chua argues that such efforts at continuity speaking are the product not only of Malaysian cultural politics, but also of conversion and Christianity itself. This book invites scholars to rethink the nature and scope of conversion, as well as the multifarious, yet distinctive, forms that Christianity can take.
Liana Chuais a lecturer in Anthropology at Brunel University.

"This book is twenty-first century ethnography at its best. Based on extended fieldwork among the Bidayuh of Sarawak, in Malaysian Borneo, The Christianity of Culture deftly weaves its empirical and theoretical strands around an ethnographic puzzle: Why have most Bidayuh Christians chosen not to sever their ties with the 'old ways'? In search of an answer, Chua crafts a compelling account of Bidayuhs' struggles with a new religious, economic, and political order following Sarawak's 'independence through Malaysia' in 1963. Along the way, we learn a great deal about the complex interrelations between Bidayuh sociality, materiality, and religious praxis at a time of swift cultural change." - John Postill, author of Media and Nation Building: How the Iban became Malaysian

"With deft strokes of great ethnographic subtlety, Chua has given us a portrait of an ethno-religious identity in the making, as the Bidayuh work through fast-changing configurations of tradition, Christianity, and Islam. She brings us the kinds of insight that can only emerge out of the give and take of true dialogue."—Webb Keane, professor of Anthropology, University of Michigan