Murderous Acts: 100 Years of Crime in the Midwest (Paperback) 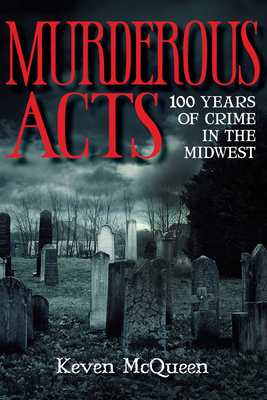 While the Midwest may be known for salt-of-the-earth folks, it's also home to murder and mayhem.

In Murderous Acts: 100 Years of Crime in the Midwest, Keven McQueen explores a century of true crimes committed in 10 Midwestern states, from the 1840s to the 1940s. With a touch of gallows humor, McQueen relies on original research to recount infamous transgressions--including Michigan's Robert Irving Latimer case, the serial murders of Nebraskan Jake Bird, and the bloody deeds of Kansas's Bender family--as well as gruesome tales that are less well known, such as the Wisconsin man with a penchant for swinging an axe at the necks of men he didn't care for, the Hoosier who killed his sweetheart in the midst of a Halloween ball, and the French nobleman who wreaked havoc in a St. Louis hotel.

Murderous Acts will intrigue and delight fans of true crime and will send a shiver down the spine of any reader fascinated by the dark history of America's Heartland.

Keven McQueen is author of 20 books covering American history, the supernatural, biography, historical true crime, and what he calls real-life surrealism. His books include Horror in the Heartland: Strange and Gothic Tales from the Midwest, Creepy California: Strange and Gothic Tales from the Golden State, Weird Wild West: True Tales of the Strange and Gothic, and New England Nightmares: True Tales of the Strange and Gothic. His work has been anthologized by the Jesse Stuart Foundation and Texas Christian University Press. He has guested on radio shows and podcasts including Darkness Radio, 30 Odd Minutes, Paranormal View, Controversial TV, Most Notorious, Thorne and Cross Haunted Nights Live, Mind's Eye, Still Unsolved, and Fringe Radio. Recently, his books have been mentioned in articles in the New York Times and on the Daily Beast/Yahoo News. McQueen is a senior lecturer in English at Eastern Kentucky University in Richm