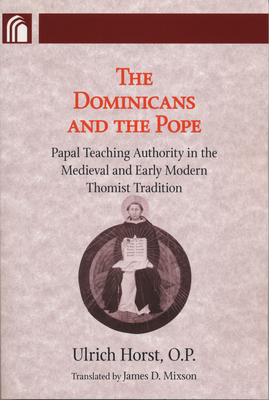 These essays examine papal teaching authority from Thomas Aquinas in the thirteenth century to the Dominican School of Salamanca in sixteenth century Spain. Fr. Ulrich Horst, O.P., an internationally renowned authority in historical theology, describes the various debates between the Dominicans and other orders over papal teaching authority, especially whether there should be limits placed on papal authority and, if so, what they might be.

Horst reviews in a brief and masterful fashion the teaching of medieval and Catholic Reformation Dominican theologians about the teaching authority of the pope. He succinctly shows the differences within the order on the topic and makes clear how Dominicans tended to differ on the matter from theologians of other orders such as the Franciscans and, later, the Jesuits, whose views would eventually lead to the proclamation at Vatican I.

In the first chapter, Horst discusses the canonization of St. Thomas, the lecture on the gospel of St. Matthew, and Summa Theologiae II-II 1, 10. Horst then examines the road to conflict under Pope John XXII and the position of a number of the Dominican theologians such Hervaeus Natalis, John of Naples, and Guido Terreni. In the last chapter, Horst brings to light the contributions of Francisco de Vitoria, Dominicus Sots, Melchior Cano, and Juan de la Pe a, among others.

Despite his distinguished career as a medievalist, little of Horst's imposing scholarly corpus has been translated into English. These lectures, then, mark an introduction of this formidable scholar to a wider audience.

Ulrich Horst, O.P., is emeritus senior professor and director of the Grabmann Institute at the University of Munich. He is the author of a number of books, including Papst, Konzil, Unfelhbarkeit and Unfehlbarkeit und Geschichte.