Women and Gender in Islam: Historical Roots of a Modern Debate (Paperback) 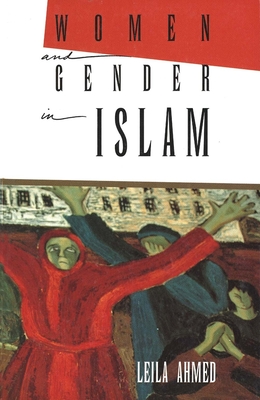 By Leila Ahmed
Email or call for price
Out of Print - This Title is Unlikely to be Available.

“Destined to become a classic. . . . It gives [Muslim women] back our rightful place, at the center of our histories.”—Rana Kabbani, The Guardian

“This book stands out as particularly original, insightful and sensitive.&rdquo;—Foreign Affairs

Are Islamic societies inherently oppressive to women? Is the trend among Islamic women to appear once again in veils and other traditional clothing a symbol of regression or an effort to return to a “pure” Islam that was just and fair to both sexes? In this book Leila Ahmed adds a new perspective to the current debate about women and Islam by exploring its historical roots, tracing the developments in Islamic discourses on women and gender from the ancient world to the present.

In order to distinguish what was distinctive about the earliest Islamic doctrine on women, Ahmed first describes the gender systems in place in the Middle East before the rise of Islam. She then focuses on those Arab societies that played a key role in elaborating the dominant Islamic discourses about women and gender: Arabia during the period in which Islam was founded; Iraq during the classical age, when the prescriptive core of legal and religious discourse on women was formulated; and Egypt during the nineteenth and twentieth centuries, when exposure to Western societies led to dramatic social change and to the emergence of new discourses on women. Throughout, Ahmed not only considers the Islamic texts in which central ideologies about women and gender developed or were debated but also places this discourse in its social and historical context. Her book is thus a fascinating survey of Islamic debates and ideologies about women and the historical circumstances of their position in society, the first such discussion using the analytic tools of contemporary gender studies.

Leila Ahmed is professor of women’s studies and director of the Near Eastern Area Studies Program at the University of Massachusetts, Amherst, and faculty associate at the Center for Middle Eastern Studies, Harvard University.

"Ahmed's rousing book is destined to become a classic. . . . It gives [Muslim women] back our rightful place, at the center of our histories."—Rana Kabbani, The Guardian

"I would not hesitate to recommend this book as a good source of information."—Joyce Mokhesi-Parker, Africa World Review

"Clearly one of the book's enduring strengths is Leila Ahmed's genuine, as opposed to academic, concern (a distinction often lost on writers of Islam) that Muslim women, for too long the subject of inflated homilies or hollow gender confrontations, strike up their own debate—on grounds designed to suit rather than stifle."—Riffat Yusuf, Africa Events

"Leila Ahmed's beautiful style takes us back to antiquity and guides us through the ages; we are made to revisit the past through the eyes of a woman—an unusual and rather refreshing way to enquire into past societies. She possesses the skill and expertise to venture into such an arduous enterprise, her sharp mind allowing her to make perceptive remarks about Muslim men and the use and misuse of religion not just as a tool of social control, but also as a cultural system, as political discourse, a means of resistance at different historical junctures."—Dr. Rashida Hankin, Islamica

"[A] very thoughtful and very brave book. . . . Should be required reading not just for Muslim intellectuals and feminists, but also for those non-Muslims, particularly Western feminists and so-called experts, who scornfully dismiss Islam as 'sexist and bigoted.'"—Asian Times

"With impressive scholarship, lucid style and a theoretical approach elegantly in command of both feminist and Islamic perspectives, Leila Ahmed . . . helps unravel the mysteries of gender and women in Islam. . . . The passion Ahmed feels for the plight of Middle Eastern women is matched only by her commitment to a style of scholarship that is parsimonious, sober, rigorous and dispassionate. . . . The thematically rich arguments of her book are centered on debunking the Islamic and colonialist myths about Muslim women, as well as correcting what she feels are erroneous assumptions made by some Western feminists."—Abbas Milani, San Francisco Chronicle

"While providing a wonderfully comprehensive survey of her subject, [Ahmed] shows how Western chauvinism has harshly — and unfairly — judged women's status in Islamic societies. She exposes this bias with force and eloquence and, in the process, makes a brilliant case for the liberation of Islamic women on their own terms and in their own time, free from Western constructs or dictates."—Susan E. Davis, New Directions for Women

"An inspiring tour de force. . . . This courageous and provocative study is a formidable historiographical milestone on whose strengths we must learn to build."—Lidwien Kapteijns, American Historical Review

"A provocative exploration . . . Leila Ahmed provides a sensitive, phenomenological rethinking of this timely subject. . . . this perceptive book marks a step toward addressing the deficiency . . . of objectively valid studies of Arab women."—Kevin F. Dwyer, Annals of the American Academy of Political and Social Science

"[Ahmed] ably portrays the circumstances of women from the medieval period into modern times by synthesizing various materials. The outcome will allow the general reader a far richer notion of women's society as a whole."—Sherifa Zuhur, Middle East Journal

"A masterful discussion of women's condition in the Muslim Middle East. She highlights the crucial historical arguments over women by skillfully incorporating excellent secondary sources on the early period and provides her own interpretations of certain key primary sources later on. . . . An important contribution."—Sherifa Zuhur, Journal of Interdisciplinary History

"A remarkable tour de force, conceived, presented, analyzed, and articulated with unusual clarity. . . . An impressive social history of mores and attitudes toward women. . . . Because of the book's exceptional breadth and depth of discussion, I enthusiastically endorse Leila Ahmed's Women and Gender in Islam as a classroom text, as a reference work, and as an exemplar of what feminist cultural history can be."—Carla Petievich, Feminist Collections

"Refreshingly balanced and brilliantly insightful, this book is a major scholarly contribution to the history of women in Islam. It is must reading for any social science or humanities course on the Middle East or Islam."—Eliz Sanasarian, International Journal of Middle East Studies

"Women and Gender in Islam, will quickly become one of the most important treatises on gender and Islam. . . . Effectively documented, strongly argued, and passionately written."—Suad Joseph, Women, War, and History

"This book stands out as particularly original, insightful and sensitive. Concentrating on one of the nearly taboo topics of Islam, its treatment of women, the author examines the patrilineal traditions in the Middle East that preceded Islam and discusses objectively the ways in which Islam both improved and curtailed the freedoms of women in its earliest days. . . . A highly original and important book."—Foreign Affairs

"This is an important book that deserves to be received beyond its primary audience of feminist readers."—Lamin Sanneh, D. Willis James, Christian Century

"Ahmed's book is a significant contribution. . . . Its ambitious scope, its lucidity, and its committed vision all make it a work that will be stimulating and informative for specialists, students, and general readers alike."—Barbara D. Metcalf, Middle Eastern Studies

"This thoughtful and thought-provoking book should be required reading for anyone who is interested in the complexity of women's experience."—Elizabeth Fox-Genovese

"A signal contribution to the question of Islam and gender as well as a solid overview of the history of gender in the region. This is a highly original, well-researched book that explores a topic of great current interest in a responsible and enlightening fashion."—Judith Tucker

"A signal contribution to the question of Islam and gender as well as a solid overview of the history of gender in the region. This is a highly original, well-researched book that explores a topic of great current interest in a responsible and enlightening fashion."—Judith Tucker

"Ahmed's book is a serious and independent-minded analysis of its subject, the best-informed, most sympathetic and reliable one that exists today. It is most powerful and compelling in its absence of clichés and hedgings, and more than anyone before her Ahmed discusses women and gender in Islam as a lived and contested reality."—Edward W. Said