First Impressions: A Reader’s Journey to Iconic Places of the American Southwest (The Lamar Series in Western History) (Hardcover) 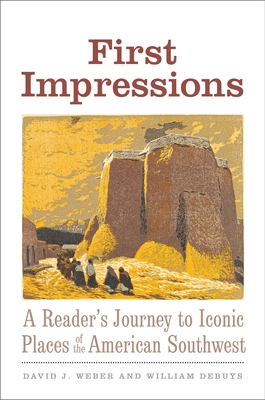 First Impressions: A Reader’s Journey to Iconic Places of the American Southwest (The Lamar Series in Western History) (Hardcover)


Email or call for price.
A guide to the history and culture of the American Southwest, as told through early encounters with fifteen iconic sites

This unique guide for literate travelers in the American Southwest tells the story of fifteen iconic sites across Arizona, New Mexico, southern Utah, and southern Colorado through the eyes of the explorers, missionaries, and travelers who were the first non-natives to describe them. Noted borderlands historians David J. Weber and William deBuys lead readers through centuries of political, cultural, and ecological change.

The sites visited in this volume range from popular destinations within the National Park System—including Carlsbad Caverns, the Grand Canyon, and Mesa Verde—to the Spanish colonial towns of Santa Fe and Taos and the living Indian communities of Acoma, Zuni, and Taos. Lovers of the Southwest, residents and visitors alike, will delight in the authors’ skillful evocation of the region’s sweeping landscapes, its rich Hispanic and Indian heritage, and the sense of discovery that so enchanted its early explorers.

Published in Cooperation with the William P. Clements Center for Southwest Studies, Southern Methodist University
David J. Weber (1940–2010) was founding director of the Clements Center for Southwest Studies at Southern Methodist University. William deBuys’s numerous books include River of Traps, a Pulitzer Prize nonfiction finalist.
“[A] vivid rendering of Southwestern history and culture specific to 15 iconic sites, from Acoma Pueblo to Carlsbad Caverns, from Mesa Verde to Zuni Pueblo, that includes the writings of explorers and indigenous people about their first encounters with each other.”—Jennifer Levin, Santa Fe New Mexican

“Weber (d. 2010) and deBuys's collaboration stands as a culmination of two lifetime's worth of devoted and passionate study. Beautifully written and impeccably researched, First Impressions takes readers through the discovery of 15 incredible places, including Ácoma, Carlsbad Caverns, El Morro, and Rainbow Bridge, among numerous other sites of beauty or historical significance. . . . This book will be a delight to scholars and interested laypersons alike. . . . A masterpiece.”—Choice

“General readers and academics alike will find this to be an engaging and powerful book.”—Benjamin H. Johnson, Southwestern Historical Quarterly

“By blending historical narratives with modern-day insights, the authors have given us a book that crosses the divide of time and broadens windshield-view impressions of these breathtaking landmarks.”—Kurt Repanshek, National Parks Traveler

“Though the book may be an armchair experience, readers should arm themselves with the volume as they visit these 15 sites, regardless of whether they are Easterners, Midwesterners or New Mexicans. The book is a rich lesson in history and self-identity.”—David Steinberg, Albuquerque Journal

“First Impressions is a rediscovery of the Southwest told through the moments of incomprehension and wonder when cultures met and sometimes collided. It is a gift for historically amnesiac America.”—Bill Hedden, Grand Canyon Trust

"From Acoma to Zuni, First Impressions takes us on a journey of mystery, stark beauty, and brutality through the eyes and voices of the first chroniclers of the Southwest. A must-read if you love our part of the country."—Tom Udall, U.S. Senator

“A first-rate introduction to the history and culture of the American Southwest, from two of the most important historians and elegant writers of the Southwest Borderlands.”—Marsha Weisiger, University of Oregon

"I would happily follow Bill deBuys anywhere."—Terry Tempest Williams, author of The Hour of Land: A Personal Topography of America's National Parks