Campaign of the Century: Kennedy, Nixon, and the Election of 1960 (Hardcover) 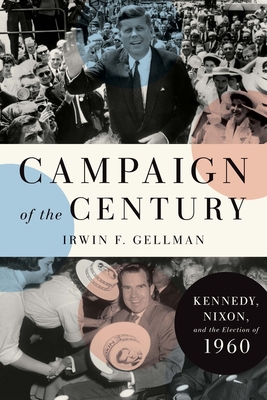 Based on massive new research, a compelling and surprising account of the twentieth century’s closest election

“[Gellman] offers as detailed an exploration of the 1960 presidential race as can be found.”—Robert W. Merry, Wall Street Journal

“A brilliant work . . . the research is absolutely phenomenal . . . This book should receive every accolade the publishing industry can give it, including the Pulitzer Prize.”—John Rothmann, KGO’s “The John Rothmann Show”

The 1960 presidential election between John F. Kennedy and Richard Nixon is one of the most frequently described political events of the twentieth century, yet the accounts to date have been remarkably unbalanced. Far more attention is given to Kennedy's side than to Nixon's. The imbalance began with the first book on that election, Theodore White’s The Making of the President 1960—in which (as he later admitted) White deliberately cast Kennedy as the hero and Nixon as the villain—and it has been perpetuated in almost every book since then. Few historians have attempted an unbiased account of the election, and none have done the archival research that Irwin F. Gellman has done. Based on previously unused sources such as the FBI's surveillance of JFK and the papers of Leon Jaworski, vice-presidential candidate Henry Cabot Lodge, and many others, this book presents the first even-handed history of both the primary campaigns and the general election. The result is a fresh, engaging chronicle that shatters long‑held myths and reveals the strengths and weaknesses of both candidates.

Irwin F. Gellman is a renowned scholar of twentieth‑century American presidential history. His books include The Contender and The President and the Apprentice. He lives in West Chester, PA.

“[Gellman] offers as detailed an exploration of the 1960 presidential race as can be found.”—Robert W. Merry, Wall Street Journal

“A brilliant work . . . the research is absolutely phenomenal . . . This book should receive every accolade the publishing industry can give it, including the Pulitzer Prize.”—John Rothmann, KGO’s “The John Rothmann Show”

“Campaign of the Century pulls no punches.”—John Gizzi, Newsmax

“Gellman offers a captivating monograph that strips away any remaining myths and raises significant questions. . . . Campaign of the Century should be the starting point for any reader interested in that most fascinating and controversial of elections—Justin P. Coffey, History News Network

“While hardly invested in rehabilitating Nixon, the historian Irwin F. Gellman has spent the past 20 years pointing out where his peers have failed to fully research the elements of Nixon’s record and life.”—Ron Slate, On the Seawall

“Six decades after the 1960 presidential election, Irwin Gellman is the first historian to peel back the powerful myths shrouding that contest. The engaging and carefully documented story that emerges is startling and fresh. . . . An impressively balanced portrait of the strengths and weaknesses of Kennedy, Nixon and their teams.”—Will Swift, author of The Kennedys Amidst the Gathering Storm and Pat and Dick: The Nixons, An Intimate Portrait of a Marriage


“As usual, the indefatigable Irwin Gellman explores heretofore overlooked archival resources in his successful quest to shed new light on the pivotal 1960 election. It will be difficult for any presidential scholar to ignore this important contribution to the history of our controversial 37th president.”—Melvin Small, author of The Presidency of Richard Nixon


“At last, a scholar has gotten the incessantly romanticized 1960 election campaign right. Irv Gellman provides a thoroughly researched, provocative account of an election that may indeed have been ‘stolen.’”—David A. Nichols, author of Ike and McCarthy: Dwight Eisenhower’s Secret Campaign against Joseph McCarthy


"Theodore White’s Making of the President 1960 cast a powerful spell. Generations of journalists and historians have made the image of gallant Jack and sweaty Dick into conventional wisdom. Now comes Nixon scholar Irwin Gellman to present a more balanced and fact-based view. Digging deep into archives neglected by most historians of the 1960 race, Gellman has written a surprising, illuminating, and fascinating account."—Evan Thomas, author of Robert Kennedy and Being Nixon

“Irwin Gellman's stunning, overdue rewrite of the 1960 election puts paid to Theodore White's celebratory presidential fable. Readers may now decide whether the republic was better served by outcomes written by winners or by truths recovered by a conscientious historian.”—David Levering Lewis, Pulitzer Prize winner for biography and author of The Improbable Wendell Willkie