A Question of Freedom: The Families Who Challenged Slavery from the Nation's Founding to the Civil War (Paperback) 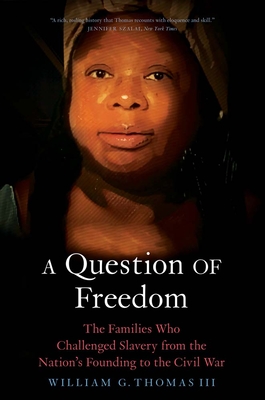 "A rich, roiling history that Thomas recounts with eloquence and skill. . . . The very existence of freedom suits assumed that slavery could only be circumscribed and local; what Thomas shows in his illuminating book is how this view was eventually turned upside down in decisions like Dred Scott. 'Freedom was local,' Thomas writes. 'Slavery was national.'"—Jennifer Szalai, New York Times

For over seventy years and five generations, the enslaved families of Prince George’s County, Maryland, filed hundreds of suits for their freedom against a powerful circle of slaveholders, taking their cause all the way to the Supreme Court. Between 1787 and 1861, these lawsuits challenged the legitimacy of slavery in American law and put slavery on trial in the nation’s capital.

Piecing together evidence once dismissed in court and buried in the archives, William Thomas tells an intricate and intensely human story of the enslaved families (the Butlers, Queens, Mahoneys, and others), their lawyers (among them a young Francis Scott Key), and the slaveholders who fought to defend slavery, beginning with the Jesuit priests who held some of the largest plantations in the nation and founded a college at Georgetown. A Question of Freedom asks us to reckon with the moral problem of slavery and its legacies in the present day.

"William Thomas casts a bright light into the period’s darkness. . . . He reveals a remarkable struggle for freedom, one buoyed at first by new aspirations in the broader culture and later doomed by rekindled fears. . . . Valuable and provocative. . . . Mr. Thomas brings a clear and sensitive eye to the tangled relationship of black and white Americans in the early 19th century."—Fergus Bordewich, Wall Street Journal

"Piecing together evidence from court archives, Thomas tells an 'intricate and intensely human story' of the enslaved families, their lawyers (among them a  young Francis Scott Key . . . ), and the slaveholders who fought to defend slavery."—Law & Social Inquiry

“Thomas’s excavation of this determined campaign of litigation is foremost an homage to the freedom suit petitioners and will be read for an understanding of their impact on American law. Along the way, Thomas also delivers a lively local history.”—Bell Julian Clement, Washington History Magazine

Selected as a finalist for the 2021 PROSE Awards, sponsored by the Association of American Publishers

Finalist for the George Washington Book Award, sponsored by the Gilder Lehrman Center and Washington College

Winner of the SHEAR Best Book Prize, sponsored by The Society for Historians of the Early American Republic

“Here is a strikingly original, eloquent, and humane book on an inhumane institution. The story restores the names and histories of people who fought for freedom for generations.”—Edward Ayers, author of The Thin Light of Freedom: The Civil War and Emancipation in the Heart of America

“In A Question of Freedom, historian William Thomas brings to light the truly remarkable and largely forgotten efforts of people held in bondage to sue for their freedom in the courts of the early United States. A genuine contribution to the social, legal, and political history of American slavery, this is a book of great depth and insight.”—Adam Rothman, historian and curator of the Georgetown Slavery Archive

“With its vivid narration, revelatory research, careful contextualization, and bracing honesty, A Question of Freedom demonstrates that freedom suits were not isolated episodes but instead a major form of slave resistance, with far-reaching and ongoing effects in the long freedom struggle. This book is essential reading for understanding the history of slavery and the modern debate over reparations.”—Elizabeth R. Varon, author of Armies of Deliverance:  A New History of the Civil War

"William Thomas has produced an important and astonishing chronicle of the legal battles waged by enslaved people for their own freedom. Braiding white-knuckle courtroom drama together with a searing exploration of his own family history, he redefines slavery’s place in early American law—not an inherent feature, but a dubious institution whose contradictions were exploited by the enslaved to protect themselves and their families.”—Yoni Appelbaum, Senior Editor, The Atlantic

"A Question of Freedom is an essential book that details the extraordinary efforts of enslaved people to challenge both the legitimacy and absoluteness of slavery in courts of law.  It is a work of remarkable honesty and humanity that should inform any conversation on the legacy of slavery. Please read it."—Lauret Savoy, author of Trace: Memory, History, Race, and the America Landscape