The Cotton Kingdom: A Traveller's Observations On Cotton And Slavery In The American Slave States, 1853-1861 (Paperback) 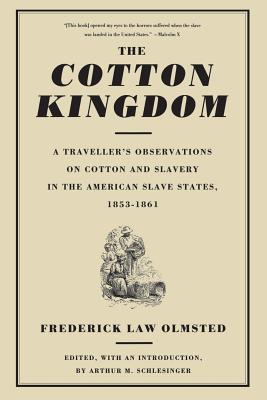 The Cotton Kingdom: A Traveller's Observations On Cotton And Slavery In The American Slave States, 1853-1861 (Paperback)


Usually Ships in 1-5 Days
Frederick Law Olmsted (1822–1903) is best known for designing parks in Manhattan, Brooklyn, Chicago, Boston, and the grounds of the Capitol in Washington. But before he embarked upon his career as the nation's foremost landscape architect, he was a correspondent for theNew York Times, and it was under its auspices that he journeyed through the slave states in the 1850s. His day-by-day observations—including intimate accounts of the daily lives of masters and slaves, the operation of the plantation system, and the pernicious effects of slavery on all classes of society, black and white—were largely collected in The Cotton Kingdom. Published in 1861, just as the Southern states were storming out of the Union, it has been hailed ever since as singularly fair and authentic, an unparalleled account of America's "peculiar institution."