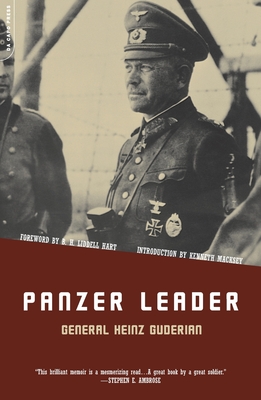 Germany's opening run of victory in World War II was only made possible by the panzer forces that Heinz Guderian (1888--1954), the father of modern tank warfare, had created and trained, and by his audacious leading of those forces from 1939 to 1941. Guderian's breakthrough at Sedan and lightning drive to the Channel coast virtually decided the Battle of France. The drive he led into the East came close to producing the complete collapse of Russia's armies, but at the end of 1941 Guderian was dismissed for taking a timely step back instead of pandering to Hitler's illusions. He was recalled to service only when Germany's situation had become desperate, and he was eventually made chief of the General Staff when all had become hopeless. Panzer Leader is a candid and dramatic account of the development and campaigns of the panzer forces that, along with the Luftwaffe, stood at the heart of blitzkrieg; it is also a searing group portrait of the Third Reich's leading personalities as they turned early victory into a protracted, agonizing defeat.

Heinz Guderian (1888-1954) rose through the Nazi ranks to become Cheif of the General Staff under Adolf Hitler. He was also the author of Achtung, Panzer! and With the Tanks in the East and West.

"This brilliant memoir is a mesmerizing read.... A great book by a great soldier."--Stephen E. Ambrose


"Panzer Leader belongs on the shelf of every serious student of this violent twentieth century."--John S. D. Eisenhower


"Guderian's memoirs belong to the classics of military literature, comparable to Grant's or Sherman's."--Newsweek


"His contempt for the Nazis is never far from the surface.... What the general does not say about the great moral and human issues of his era is as revealing as anything ever written about the mentality of the German officer corps."--New Yorker


"There is no soberer and better story of how and why the Wehrmacht failed in Russia.... The military detail is touched by sharp descriptions of the fighting and vivid glimpses of the vague, distorted, half-life of men at war."--New York Times Book Review