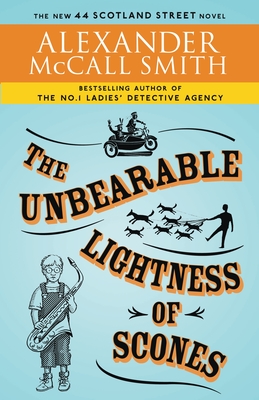 This is book number 5 in the 44 Scotland Street Series series.

The residents and neighbors of 44 Scotland Street and the city of Edinburgh come to vivid life in these gently satirical, wonderfully perceptive serial novels, featuring six-year-old Bertie, a remarkably precocious boy—just ask his mother.

Featuring all the quirky characters we have come to know and love, The Unbearable Lightness of Scones, finds Bertie, the precocious six-year-old, still troubled by his rather overbearing mother, Irene, but seeking his escape in the Cub Scouts. Matthew is rising to the challenge of married life with newfound strength and resolve, while Domenica epitomizes the loneliness of the long-distance intellectual. Cyril, the gold-toothed star of the whole show, succumbs to the kind of romantic temptation that no dog can resist and creates a small problem, or rather six of them, for his friend and owner Angus Lordie.

With his customary deftness, Alexander McCall Smith once again brings us an absorbing and entertaining tale of some of Scotland's most quirky and beloved characters--all set in the beautiful, stoic city of Edinburgh.

Alexander McCall Smith is the author of the international phenomenon The No. 1 Ladies’ Detective Agency series, the Isabel Dalhousie Series, the Portuguese Irregular Verbs series, and the 44 Scotland Street series. He is professor emeritus of medical law at the University of Edinburgh in Scotland and has served on many national and international bodies concerned with bioethics.

Praise for the 44 Scotland Street series:

"Delightful. . . . Sweet. . . . Graceful. . . . Wonderful. . . . Alexander McCall Smith writes faster than most people read, which is good news for [his] legions of fans who rarely have to go more than a few months without a new fix of his gentle but powerfully addicting fiction."--Entertainment Weekly

"Entertaining and witty. . . . A sly send-up of society in Edinburgh."--Orlando Sentinel

"Mr. McCall Smith, a fine writer, paints his hometown of Edinburgh as indelibly as he captures the sunniness of Africa. We can almost feel the mists as we tread the cobblestones."--The Dallas Morning News

"Alexander McCall Smith is the most genial of writers and the most gentle of satirists. . . . [The] characters are great fun . . . [and] McCall Smith treats all of them with affection." --Rocky Mountain News