Battling the Gods: Atheism in the Ancient World (Paperback) 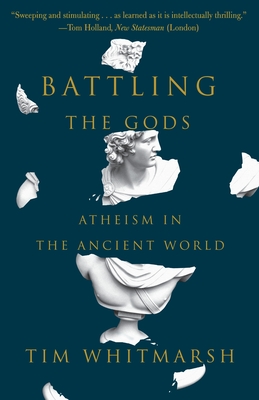 How new is atheism? Although adherents and opponents alike today present it as an invention of the European Enlightenment, when the forces of science and secularism broadly challenged those of faith, disbelief in the gods, in fact, originated in a far more remote past. In Battling the Gods, Tim Whitmarsh journeys into the ancient Mediterranean, a world almost unimaginably different from our own, to recover the stories and voices of those who first refused the divinities. Whitmarsh provides a bracing antidote to our assumptions about the roots of freethinking. By shining a light on atheism’s first thousand years, Battling the Gods offers a timely reminder that nonbelief has a wealth of tradition of its own, and, indeed, its own heroes.

TIM WHITMARSH is currently the A. G. Leventis Professor of Greek Culture at the University of Cambridge. He has published widely on ancient prose fiction, including Narrative and Identity in the Ancient Greek Novel: Returning Romance, and edited The Cambridge Companion to the Greek and Roman Novel.

“Sweeping and stimulating . . . as learned as it is intellectually thrilling. . . . Battling the Gods fills a gap that probably few of us had even been aware of, and does so comprehensively.” —Tom Holland, New Statesman

“Illuminating, lively, learned and cliché-busting . . . a work of openly committed scholarship. . . . Whitmarsh aims to rescue ancient doubt and disbelief from a long tradition of slander and opprobrium . . . and he has an eye-opening story to tell.”   —Boyd Tonkin, The Independent

“Brilliant. . . . This is an invigorating, urgent book that makes an important contribution to a central contemporary debate. Whitmarsh makes a compelling case that atheism has had a distinguished and varied lineage.”  —Emily Wilson, The Guardian

“[A] beautifully written and highly persuasive account of the origins of atheism in the West.”  —Peter Jones, The Literary Review

“Excellent . . . Whitmarsh argues convincingly that . . . [atheism] isn’t a product of the modern age but rather reaches back to early Western intellectual tradition in the ancient Greek world  . . . The best part of Battling the Gods is the Greek chorus of atheists themselves . . . If you’ve been paying attention to contemporary atheists you might be startled by the familiarity of the ancient positions.” —Rebecca Newberger Goldstein, The New York Times Book Review

“Remarkable . . . a sophisticated and nuanced account of a fascinating and too often overlooked world . . . as impressive for its breadth and erudition as for the concision, clarity and ease with which it conveys . . . a complex story. Mr. Whitmarsh’s book is a delight to read.”  —Christopher Carroll, The Wall Street Journal

“A seminal work . . . to be studied, reread, and referenced . . . With a nonprofessorial, relaxed style . . . Whitmarsh delves deeply into the many philosophers who felt gods were invented by humans or saw laws, in addition to religion, as merely imposition of order . . . The author’s erudition is impressive.” —Kirkus (starred review)

“Battling the Gods is a timely and wonderfully lively reminder that atheism is as old as belief.  Skepticism, Whitmarsh shows, did not slowly emerge from a fog of piety and credulity.  It was there, fully formed and spoiling for a fight, in the bracing, combative air of ancient Athens.  That the fight was never decisively won—or lost—only makes its history, as this book shows, all the more gripping.”  —Stephen Greenblatt, author of The Swerve: How the World Became Modern

“If you have ever wondered about premature skeptics who questioned beliefs held sacrosanct in their own time—such as religion or slavery in the ancient world—this is the book for you. In plain English, classics scholar Tim Whitmarsh explores the minds of those who doubted the existence of gods more than 2500 years ago and got into trouble because of their doubts. It is a pure delight to be introduced to people who questioned the supernatural long before modern science provided physical evidence to support the greatest insights of human reason.” —Susan Jacoby, author of Freethinkers: A History of American Secularism

“In the face of many crude modern discussions of atheism (both pro and anti), it's great to have Tim Whitmarsh's sophisticated exploration of various versions of ancient disbelief. It brilliantly opens up all kinds of issues, from the roots of religious conflict and the alliance of religion and politics to (some) virtues of old-fashioned polytheism.”
—Mary Beard, author of Confronting the Classics: Traditions, Adventures, and Innovations

“Erudite and sweeping, graceful and entertaining, Battling the Gods relates the fascinating history of atheism in Greco-Roman antiquity, setting contemporary debates about religion and secularism in much needed context.” —Danielle Allen, author of Why Plato Wrote