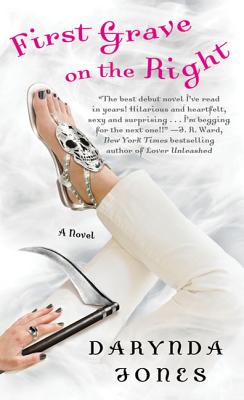 This is book number 1 in the Charley Davidson Series series.

Charley sees dead people. That's right, she sees dead people. And it's her job to convince them to "go into the light." But when these very dead people have died under less than ideal circumstances (i.e., murder), sometimes they want Charley to bring the bad guys to justice. Complicating matters are the intensely hot dreams she's been having about an Entity who has been following her all her life...and it turns out he might not be dead after all. In fact, he might be something else entirely.

This is a thrilling debut novel from Darynda Jones, an exciting newcomer to the world of paranormal romantic suspense.

First Grave on the Right is the winner of the 2012 Rita Award for Best First Book.

“Jones skillfully establishes the novel's setting and keeps up the pace with plenty of action. And let's be honest--the sex is pretty hot, too. Fans of Sherrilyn Kenyon and other authors of paranormal romance will love this series debut.” —Library Journal (starred review)

“Fast-talking Charley's wicked exuberance and lust for life will appeal to fans of MaryJanice Davidson and Janet Evanovich and maybe fill a hole for those mourning the recently canceled Ghost Whisperer.” —Publishers Weekly

“Jones makes a truly memorable debut with her unique tale that is sexy, mysterious, and sarcastically fun!” —RT Books Reviews

“A true paranormal princess has been proclaimed. Bravo Ms. Jones, you have just hit the big time. . . . A brilliant novel . . . Do not walk; run to get your copy of First Grave on the Right when it debuts.” —Night Owl Reviews

“This book is full of surprises and fun to be had for all. I barely finished this book and already can't wait to visit with Charley Davidson again in the next novel, Second Grave on the Left. First Grave on the Right deserves nothing less than a Five Angel, Recommend Read status.” —Fallen Angel Reviews

“Hold on to your hats and get comfortable, you won't want to get up for a long, long time as Charley Davidson sweeps you in and holds on tight.” —The Romance Reviews

“In the currently crowded paranormal world, First Grave on the Right is a bright beacon of originality. Jones writes with a sharp, addictively acerbic sense of humor, and she combines genres with the carefully controlled precision of a master literary mixologist.” —Reader to Reader . . .

“A fast and fun read [that] will leave you begging for more. Second Grave on the Left is due out in August, and I can't wait.” —Fresh Fiction

“This book takes a humorous view on the old Grim Reaper cliché. Charley is a smart, enjoyable character with enough snark to keep one laughing even as the plot darkens.” —Affaire de Coeur

“I am furiously envious of Darynda Jones and rue the day she came up with this concept, damn her eyes. First Grave on the Right . . . kidnapped me from the first paragraph, and didn't let go until the exceedingly yummy conclusion.” —MaryJanice Davidson, New York Times bestselling author of Undead and Unwelcome and Me, Myself and Why?

“First Grave on the Right is smart, sharp, and wickedly entertaining. Grab this one.” —Jayne Ann Krentz, New York Times bestselling author of Fired Up

“First Grave on the Right is a phenomenal debut! This series opener has it all--rollicking humor, sizzling sexual tension, and a spine-tingling mystery. I'm eagerly awaiting the next Charley Davidson tale!” —Kresley Cole, New York Times bestselling author of Pleasure of a Dark Prince