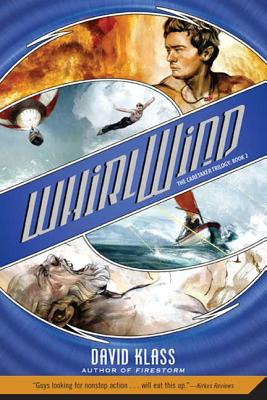 This is book number 2 in the Caretaker Trilogy series.

In Firestorm, the first book of the Caretaker Trilogy, seventeen-year-old Jack Danielson saved the world's oceans, but at great personal cost -- his parents were killed and everything he knew and believed in was turned upside down.

Now Jack has come home to see P.J., his girlfriend and sole remaining touchstone. But she's missing, and blame falls on Jack. On the run with Gisco, his crafty canine sidekick, Jack is literally caught up in a whirlwind as he travels to the heart of darkness to rescue P.J. -- a journey that will bring him face-to-face with the father of his old nemesis, the colonel, aka the Dark Lord from the future. Jack's quest becomes all the more complicated as he discovers that the only person who can stop the Dark Lord is another time traveler, the wizard Kidah, who has disappeared in the present.

Book 2 of the Caretaker Trilogy mixes heart-racing adventure with an urgent ecological warning about the fragility of the world's rain forests and the importance of respect for indigenous peoples. Readers will be drawn into the vortex of the quest -- whether or not they're familiar with Book 1.

David Klass is the author of many young adult novels, including You Don't Know Me, Losers Take All, and Grandmaster. He is also a Hollywood screenwriter, having written more than twenty-five action screenplays, including Kiss the Girls, starring Morgan Freeman and Ashley Judd, Walking Tall, starring The Rock, and Desperate Measures, starring Michael Keaton and Andy Garcia. Klass grew up in a family that loved literature and theater-his parents were both college professors and writers-but he was a reluctant reader, preferring sports to books. But he started loving the adventure stories his parents would bring home from the library-particularly Jack London, Robert Louis Stevenson and Alexandre Dumas. After his sister twice won a story contest in Seventeen magazine, Klass decided he would win it too, and when he was a senior in high school, he did, publishing his first story, "Ringtoss," in the magazine. He studied at Yale University, where he won the Veech Award for Best Imaginative Writing. He taught English in Japan, and wrote his first novel, The Atami Dragons, about that experience. He now lives in New York with his wife and two children.

“The fast-paced, gripping plot is an excellent vehicle for presenting a significant environmental message to an audience that might not hear it otherwise. The story stands on its own, but will be especially appreciated by those who experienced the cliff-hanger ending of Firestorm. All readers will eagerly await the third book.” —School Library Journal

“Guys looking for nonstop action will...eat this up.” —Kirkus Reviews

“Klass continues the nonstop action in this thrilling sequel, in which the sensitive, appealingly conflicted hero finds plenty of new opportunities to confront ecological crisis.” —Booklist