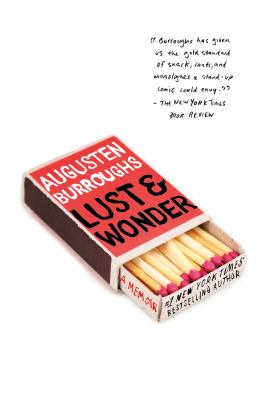 “We have read about his crazy childhood, his struggles with alcohol, and his troubled relationships with his father and Christmas. Now, we have Burroughs' take on love and romance, and what a tale it is! This is a love story as only Burroughs can tell it - the wrong lovers, the long-term relationship that turned out to be toxic, and the love that was staring him in the face all along. Roses and moonlight it is not, but the course of true love never does run smooth. I laughed, I cried - just read it!”
— Susan Taylor (M), Market Block Books, Troy, NY

From the beloved #1 New York Times bestselling author comes an intimate look at the driving forces in one man’s life.

With Augusten's unique and singular observations and his own unabashed way of detailing both the horrific and the humorous, Lust & Wonder is a hilariously frank memoir that his legions of fans have been waiting for. His story began in Running with Scissors, endured through Dry, and continues with this memoir, the capstone to the life of Augusten Burroughs.

Funny, sweet, alarming, and ultimately, moving and tender, Lust & Wonder is an experience of a book that will resonate with anyone who has loved and lost and loved again.

Augusten Burroughs is the author of Running with Scissors, Dry, Magical Thinking: True Stories, Possible Side Effects, A Wolf at the Table and You Better Not Cry. He is also the author of the novel Sellevision, which has been optioned for film. The film version of Running with Scissors, directed by Ryan Murphy and produced by Brad Pitt, was released in October 2006 and starred Joseph Cross, Brian Cox, Annette Bening (nominated for a Golden Globe for her role), Alec Baldwin and Evan Rachel Wood. Augusten's writing has appeared in numerous magazines and newspapers around the world including The New York Times and New York Magazine. In 2005 Entertainment Weekly named him one of "The 25 Funniest People in America." He resides in New York City and Western Massachusetts.