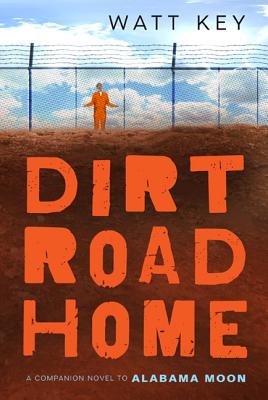 This is book number 2 in the Alabama Moon series.

The story of of the orphan boy Moon, begun in Watt Key's award-winning Alabama Moon, continues with Dirt Road Home

After his recapture, gutsy 14-year-old Hal Mitchell is sentenced to live at Hellenweiler, an institution that is more like a jail than the boys' home it's supposed to be. Hal could walk out in just a few months if he keeps out of trouble. But in a place like Hellenweiler, the more he tries to avoid the gangs and their violence, the stronger Hal's fellow inmates try to make him fail. This title has Common Core connections.

"Key does a fabulous job of keeping his readers involved in the story and vested in the characters. Even reluctant readers will most likely find this one hard to put down." -- VOYA

Albert Watkins Key, Jr., publishing under the name Watt Key, is an award-winning southern fiction author. He grew up and currently lives in southern Alabama with his wife and family. Watt spent much of his childhood hunting and fishing the forests of Alabama, which inspired his debut novel, Alabama Moon, published to national acclaim in 2006. Alabama Moon won the 2007 E.B. White Read-Aloud Award, was included on Time Magazine's list of the Best One Hundred YA Books of All Time, and has been translated in seven languages.

“With authentic characters and a candid first-person narrative, Key's story offers a disturbing appraisal of life in a juvenile facility, and a riveting battle for justice.” —Publishers Weekly

“A gripping tale of a 14-year-old caught in a justice system that is not about justice at all.” —Kirkus Reviews

“Hal quickly learns that the boys who want to fight him aren't his real challenge--it's the guards who allow it to happen.” —Birmingham Magazine

“. . . Hal's efforts to contain his rage and navigate brawls keep the atmosphere tense and pacing fleet. . . . for comeuppance it doesn't get much more satisfying.” —Booklist

“The tension, positioning, threats, and shifting alliances among the boys are believable and will hook readers.” —School Library Journal

“I really liked the book Dirt Road Home. This was the most realistic book I've ever enjoyed. The characters did what I think what real people would do.” —Travis, age 11, as part of the Blue Willow readers program