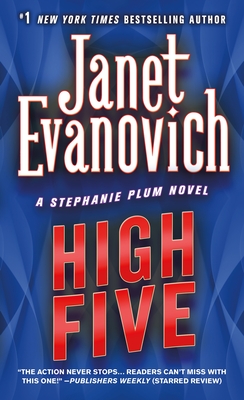 This is book number 5 in the Stephanie Plum Novels series.

Out of bail skippers and rent money, Stephanie Plum throws caution to the wind and follows in the entrepreneurial bootsteps of Super Bounty Hunter, Ranger, engaging in morally correct and marginally legal enterprises. So, a scumball blows himself to smithereens on her first day of policing a crack house and the sheik she was chauffeuring stole the limo. But hey, nobody's perfect! Anyway, Stephanie has other things on her mind. Her mother wants her to find Uncle Fred who's missing after arguing with his garbage company; homicidal rapist Benito Ramirez is back, quoting scripture and stalking Stephanie; vice cop Joe Morelli has a box of condoms with Stephanie's name on it; and Stephanie's afraid Ranger has his finger on her trigger. The whole gang's here for mirth and mayhem in Janet Evanovich's High Five. Read at your own risk in public places.
Janet Evanovich is the author of the Stephanie Plum books, including One for the Money and Sizzling Sixteen, and the Diesel & Tucker series, including Wicked Appetite. Janet studied painting at Douglass College, but that art form never quite fit, and she soon moved on to writing stories. She didn’t have instant success: she collected a big box of rejection letters. As she puts it, “When the box was full I burned the whole damn thing, crammed myself into pantyhose and went to work for a temp agency.” But after a few months of secretarial work, she managed to sell her first novel for $2,000. She immediately quit her job and started working full-time as a writer. After a dozen romance novels, she switched to mystery, and created Stephanie Plum. The rest is history. Janet’s favorite exercise is shopping, and her drug of choice is Cheeze Doodles.

“This one deserves our high five!” —Liz Smith, Syndicated Columnist