The Cats of Tanglewood Forest (Hardcover) 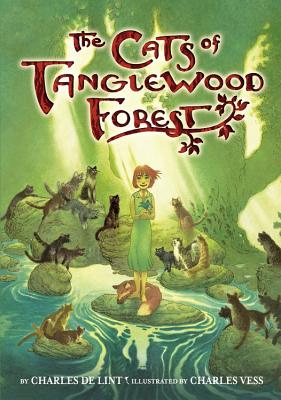 “There are so many brilliant characters in and about Tanglewood Forest! de Lint has filled the forest to bursting, weaving a tapestry of a tale out of folklore and myth, both American and international. Set in a time when wild things still roamed on the edges of farmland and neighbors still knew each other, this is another classic from a fantasy master!”
— Elizabeth Anker, Alamosa Books, Albuquerque, NM

In this whimsical, original folktale, written and illustrated throughout in vibrant full color by two celebrated masters of modern fantasy, a young girl's journey becomes an enchanting coming-of-age story about magic, friendship, and the courage to shape one's own destiny.

Lillian Kindred spends her days exploring the Tanglewood Forest, a magical, rolling wilderness that she imagines to be full of fairies. The trouble is, Lillian has never seen a wisp of magic in her hills--until the day the cats of the forest save her life by transforming her into a kitten. Now she must set out on a perilous adventure that will lead her through untamed lands of fabled creates--from Old Mother Possum to the fearsome Bear People--to find a way to make things right.

Charles De Lint is the much beloved author of more than seventy adult, young adult, and children's books, including The Cats of Tanglewood Forest, The Blue Girl, The Painted Boy, and Under My Skin. Well-known throughout fantasy and science-fiction circles as one of the trailblazers of the modern fantasy genre, he is the recipient of the World Fantasy, White Pine, Crawford, and Aurora awards. De Lint is a poet, songwriter, performer, and folklorist, and he writes a monthly book-review column for the Magazine of Fantasy & Science Fiction. He shares his home in Ottawa, Canada, with his wife, MaryAnn Harris.

Charles Vess is a world-renowned artist and a three-time winner of the World Fantasy Award, among several others. His work has appeared in magazines, comic books, and novels, including The Cats of Tanglewood Forest, The Coyote Road: Trickster Tales, Peter Pan, The Book of Ballads, and Stardust, written by Neil Gaiman and made into an acclaimed film by Paramount Pictures in 2007. Vess has also illustrated two picture books with Gaiman, Instructions and Blueberry Girl, that were New York Times bestsellers. His art has been featured in several gallery and museum exhibitions across the United States as well as in Spain, Portugal, the United Kingdom, and Italy. He lives on a small farm and works from his studio, Green Man Press, in southwest Virginia.

* "Has a wonderfully old-fashioned fable-like feel to it, imparting a message of 'be careful what you wish for' through beautifully descriptive, finely tuned prose that leaves no doubt about the lesson being taught, yet makes the learning of it a joy."
—Quill & Quire, starred review

"The story's lyrical, folkloric style is well suited to a tale of magic and mystery."
—Booklist