The Blood of Heroes: The 13-Day Struggle for the Alamo--and the Sacrifice That Forged a Nation (Hardcover) 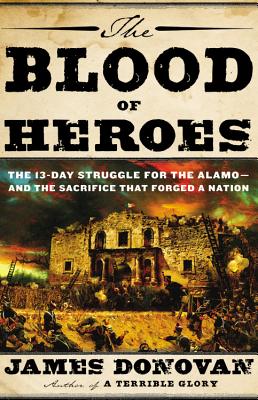 On February 23, 1836, a large Mexican army led by dictator Santa Anna reached San Antonio and laid siege to about 175 Texas rebels holed up in the Alamo. The Texans refused to surrender for nearly two weeks until almost 2,000 Mexican troops unleashed a final assault. The defenders fought valiantly-for their lives and for a free and independent Texas-but in the end, they were all slaughtered. Their ultimate sacrifice inspired the rallying cry "Remember the Alamo!" and eventual triumph.

Exhaustively researched, and drawing upon fresh primary sources in U.S. and Mexican archives, The Blood of Heros is the definitive account of this epic battle. Populated by larger-than-life characters -- including Davy Crockett, James Bowie, William Barret Travis -- this is a stirring story of audacity, valor, and redemption.

James Donovan is the author of the bestselling books The Blood of Heroes: The 13-Day Struggle for the Alamo -- and the Sacrifice That Forged a Nation and A Terrible Glory: Custer and the Little Bighorn - the Last Great Battle of the American West. He lives in Dallas, Texas.

"The best book on the battle [of the Alamo]...Donovan has a splendid sense of historical narrative...Those making their entrance into Alamo lore for the first time are well advised to begin with The Blood of Heroes."—Allen Barra, Houston Chronicle

"The best book on Texas history....This is a big deal.... It's probably the best nonfiction I have read about Texas, history told in a way that reads like fiction....The Blood of Heroes is a good book for anyone with a love of history."—Michael Merschel, Dallas Morning News

"Mr. Donovan's gripping book is history at its best-exactingly sourced and written with a vividness that challenges you to put it down. Even those familiar with an oft-told story will delight in the richness of his detail."
—The Washington Times

"Donovan's book reads fast, like a gallop through South Texas. You are carried through it. The Alamo is one of the greatest American stories, and he tells it in a sweeping, propulsive narrative that includes fine portraits of all of those wonderful, larger-than-life figures that have embedded themselves in the national lexicon: General Santa Anna, Jim Bowie, Davy Crockett, and William Barret Travis. A first-rate read from a fine historian."—S.C. Gwynne, author of Empire of the Summer Moon

"The Blood of Heroes is surely the best account to date, one that presents plenty of new insights while acting as a corrective-or at least an alternative viewpoint-to previous accounts....Donovan combines that vital blend of authoritative scholarship with the vivid writing necessary to make an oft-told tale seem fresh."—William C. Davis, Military History Quarterly

"Jim Donovan combines two exceptional talents-those of a first rate story teller and a first rate historian. In The Blood of Heroes, he gives a new and compelling narrative version of one of the most dramatic stories in American History, while at the same time thoughtfully and conscientiously remaining anchored to the wide range of original sources- including many only recently come to light. I predict his book will be one of the best classics to remember the Alamo."—Todd Hansen, The Alamo Reader: A Study in History

"An authoritative, moving retelling of an enduring episode of sacrifice and courage ...Donovan's thoroughly researched and agreeably told story focuses on the 13-day standoff, but he also supplies crucial context...Yes, the Alamo is remembered, but not without controversy. What really happened inside those battered walls? Did Travis really draw a line in the sand, asking all who would stand with him to step across it? Without breaking the flow of his compelling story, Donovan reliably separates fact from legend, persuasively assessing the evidence and artfully setting the scene."
—Kirkus Reviews

"Donovan revisits the story and leaves us once again proud of what occurred and of the men who gave their lives....I am...impressed with his more than 100 pages of appendices, notes and bibliography in The Blood of Heroes."—State Journal-Register