Girl in the Blue Coat (Paperback) 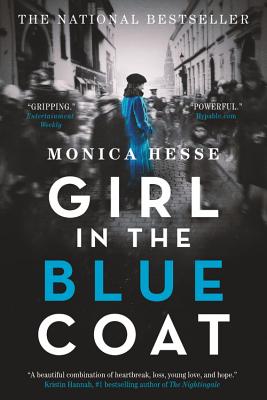 Girl in the Blue Coat (Paperback)

Amsterdam, 1943. Hanneke spends her days procuring and delivering sought-after black market goods to paying customers, her nights hiding the true nature of her work from her concerned parents, and every waking moment mourning her boyfriend, who was killed on the Dutch front lines when the Germans invaded. She likes to think of her illegal work as a small act of rebellion.

On a routine delivery, a client asks Hanneke for help. Expecting to hear that Mrs. Janssen wants meat or kerosene, Hanneke is shocked by the older woman's frantic plea to find a person--a Jewish teenager Mrs. Janssen had been hiding, who has vanished without a trace from a secret room. Hanneke initially wants nothing to do with such dangerous work, but is ultimately drawn into a web of mysteries and stunning revelations that lead her into the heart of the resistance, open her eyes to the horrors of the Nazi war machine, and compel her to take desperate action.

Beautifully written, intricately plotted, and meticulously researched, Girl in the Blue Coat is an extraordinary novel about bravery, grief, and love in impossible times.

Don't miss The War Outside and They Went Left, two more gripping historical novels by Monica Hesse
Monica Hesse is the bestselling author of Girl in the Blue Coat and American Fire, as well as a journalist with The Washington Post. She lives outside Washington, D.C. with her husband and their dog.
The Edgar Award Winner for Best Young Adult Mystery Novel 2017
An Entertainment Weekly Best YA Book of 2016
A Booklist Best Young Adult Book of 2016
A 2017 Indies Choice Awards Finalist for Best Young Adult Book
A YALSA 2017 Best Book for Young Adults
A New York Public Library Best Book for Teens of 2016
A Notable Social Studies Trade Books for Young People Selection 2017
A 2017 Bank Street College of Education Best Children's Book of the Year
A 2018-2019 California Young Reader Medal nominee
2018 All Iowa Young Adults Read


"Girl in the Blue Coat is a powerful, compelling coming-of-age story set against the dark and dangerous backdrop of World War II. It's an important and page-turning look at the choices all of us--including young adults--have to make in wartime. A beautiful combination of heartbreak, loss, young love, and hope."—Kristin Hannah, #1 New York Times bestselling author of The Nightingale

"A tapestry of guilt and acceptance, growing responsibility, and reluctant heroism, Hanneke's coming-of-age under heartbreaking circumstances is a jarring reminder of how war consumes and transforms the passions of ordinary life. Every devastating moment of this beautiful novel is both poignant and powerful, and every word feels true."
—ElizabethWein, New York Times bestsellingauthor of Black Dove, White Raven; Rose Under Fire; and the Printz Honor-winningCode Name Verity

"In an occupied city, a young woman's daring transforms into true courage when she confronts a mystifying disappearance. From page one, I couldn't turn the pages fast enough. Enthralling."—Judy Blundell, New York Times bestselling author of Strings Attached and the National Book Award-winning What I Saw and How I Lied

"It's no small feat to bring the past to life, especially a history as dark and desperate as World War II. Monica Hesse does just this with Hanneke's story. Brace yourself, dear reader, to have your heart bruised--and possibly even broken--in the most meaningful of ways."—Ryan Graudin, author of The Walled City and Wolf by Wolf

* "[An] affecting novel...that skillfully combines reality with fiction. Her characters come alive, and...Hesse's pacing infuses her story with thriller suspense, enriching the narrative with dramatic surprises both small and large."—Booklist

"Taut and intelligent... the historical setting is rendered the way only an expert can do it."
—The Washington Post

"Rich in content and emotion, this is a first-rate companion to the historical tales of the onderduikers, the hidden Jews of Holland, and a compelling read"
—Kirkus Reviews

"This heartbreaking story of terror and loss sweeps you into a time-is-running-out mystery that delivers plot twists and a shocking final punch that'll haunt you for days."
—Justine Magazine

"A moving immersion into life in WWII."
—The St. Louis Post-Dispatch