6 Times We Almost Kissed (And One Time We Did) (Hardcover) 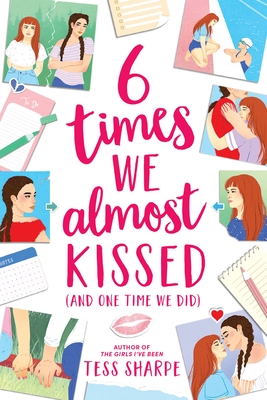 6 Times We Almost Kissed (And One Time We Did) (Hardcover)

“This book is a gift not only to girls in love, but to all teens forced to carry adult burdens too soon. An incandescently beautiful novel of young love, loss, and the family we forge when blood ties alone aren’t enough to see us through.”
— Jaye Lawrence, Content Bookstore, Northfield, MN

Six moments lead us to two girls, one kiss, and three little words that were maybe always true in this gorgeous novel perfect for fans of Nina LaCour and Jenny Han.

After years of bickering, Penny and Tate have called a truce: they’ll play nice. They have to. Their mothers (life-long best friends) need them to be perfect, drama-free daughters when Penny’s mother becomes a living liver donor to Tate’s mom. Forced to live together as the Moms recover, the girls’ truce is essential in keeping everything—their jobs, the house, the finances, the Moms’ healing—running smoothly. They’ve got to let this thing between them go.

It’s just this confusing thing that keeps happening. You know, from time to time. For basically their entire teenaged existence.

They’ve never talked about it. They’ve always ignored it in the aftermath. But now they’re living across the hall from each other.

And some things—like their kisses—can’t be almosts forever.

Told through two girls’ present and six moments from their past, this dynamic love story shows that sometimes the person you need the most has been there for you all along.

Born in a mountain cabin to a punk-rocker mother, Tess Sharpe grew up in rural California. She lives deep in the backwoods with a pack of dogs and a growing colony of feral cats. You can find her on twitter @sharpegirl.

* “Tess Sharpe's latest endeavor has all the trappings of a quintessential romance. [It dissects] Penny and Tate's thorny romance…their relationships with themselves, and…the very nature of love.” —Booklist, starred review

“In this character-driven, slow-burn romance, both Penny and Tate are engaging voices, enriching the narrative with their strong and very different personalities. It’s impossible to choose a favorite…Well characterized and wholly entertaining.”—Kirkus

The Girls I've Been:

"Not since Veronica Mars have hardscrabble swagger, enormous grief and teenage noir been combined into such a satisfying piece of storytelling. The Girls I've Been is a heart-wrenching, perfectly paced, cinematic thriller . . . a romance, a tragedy and a story about reclaiming agency and power. It is a triumph." —Bookpage, starred review

"Harley is one of the most complex, fascinating, dangerous characters I've encountered in years." —Lisa Gardner

"Pulls off something rare." —Chicago Tribune

"Possibly the most powerful, original female character we've had in decades." —New York Journal of Books

* "Sharpe is definitely a name to watch." —Booklist, starred review

* "This beautifully realized debut delves into the emotions of a girl recovering from drug addiction and grief, all wrapped up in a solid mystery." —Kirkus Reviews, starred review

* "Sharpe creat[es] a lacerating picture of grief and regret. ...The murder mystery is compelling, and its resolution serves as a reminder that love is irrevocably tied to loss and that few people get out of it unscathed." —Bulletin of the Center for Children's Books, starred review

"This romance is full of struggle and strong emotions, likely to find an appreciable YA audience." —School Library Journal