Where Gods Fear to Go (West of West #3) (Paperback) 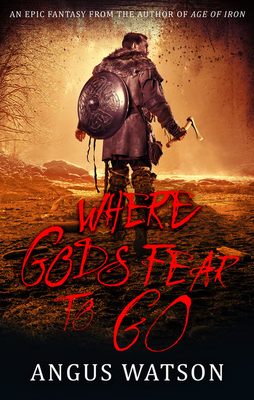 This is book number 3 in the West of West series.

~b~>The outrageously thrilling West of West trilogy comes to an action-packed close in Where Gods Fear to Go -- a gritty epic fantasy journey in which a mismatched group of refugees battle animals and monsters, an unforgiving land and each other as they cross a continent to fulfill a prophecy.
Battling across the Shining Mountains, the questers discover a land more terrifying than they ever could've imagined--and they've fought thunder lizards.
All the while fighting and falling in love, the tentatively allied Wootah and Calnians must survive monster attacks, flash floods, and tornados to uncover the secret of The Meadows. And then comes the hard part.
To save themselves and everybody else, they will travel west of west, deeper into danger...and attempt to take on a goddess who has already killed all the gods.

West of WestYou Die When You DieThe Land You Never LeaveWhere Gods Fear to Go
For more Angus Watson, check out:
Iron AgeAge of IronClash of IronReign of Ironspan

Angus Watson is an author and journalist living in London. He's written hundreds of features for many newspapers including the Times, Financial Times and the Telegraph, and the latter even sent him to look for Bigfoot. As a fan of both historical fiction and epic fantasy, Angus came up with the idea of writing a fantasy set in the Iron Age when exploring British hillforts for the Telegraph, and developed the story while walking Britain's ancient paths for further articles.

"Dark humor and a strong narrative voice ... Finn is a dynamic protagonist."—Publisher's Weekly on Where Gods Fear to Go

"A bloody good epic for fans of Kings of the Wyld, with a colorful cast of characters and prose studded with delightfully dark gallows humor."—B&N SciFi and Fantasy Blog on The Land You Never Leave

"In this bloody, brutal historical fantasy, Watson kicks off a trilogy inspired by the Vikings' settling North America a millennium ago, albeit with a magical twist."— Publishers Weekly on You Die When You Die

"This is a visceral, action-packed debut, full of humor and vivid details that is sure to win the devotion of plenty of fans."—RT Book Reviews on You Die When You Die

"Raw, violent, and gritty."—Booklist on You Die When You Die

"Hugely entertaining."—SFX on You Die When You Die

"A fun and addictive read."—Fantasy Faction on Age of Iron