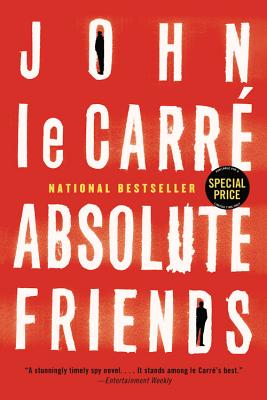 
Email or call for price.
A "stunningly timely spy novel" that takes readers from 1960s West Berlin to the Iraq War (Entertainment Weekly) from the author of Tinker, Tailor, Soldier, Spy and The Spy Who Came In From the Cold.

Today, Mundy is a down-at-the-heels tour guide in southern Germany, dodging creditors, supporting a new family, and keeping an eye out for trouble while in spare moments vigorously questioning the actions of the country he once bravely served. And trouble finds him, as it has before, in the shape of an old German student friend, radical, and onetime fellow spy, the crippled Sasha, seeker after absolutes, dreamer, and chaos addict. After years of trawling the Middle East and Asia as an itinerant university lecturer, Sasha has yet again discovered the true, the only, answer to life -- this time in the form of a mysterious billionaire philanthropist named Dimitri. Thanks to Dimitri, both Mundy and Sasha will find a path out of poverty, and with it their chance to change a world that both believe is going to the devil. Or will they? Who is Dimitri? Why does Dimitri's gold pour in from mysterious Middle Eastern bank accounts? And why does his apparently noble venture reek less of starry idealism than of treachery and fear? Some gifts are too expensive to accept. Could this be one of them? With a cooler head than Sasha's, Mundy is inclined to think it could.

In Absolute Friends, John le Carre delivers the masterpiece he has been building to since the fall of communism: an epic tale of loyalty and betrayal that spans the lives of two friends from the riot-torn West Berlin of the 1960s to the grimy looking-glass of Cold War Europe to the present day of terrorism and new alliances. This is the novel le Carre fans have been waiting for, a brilliant, ferocious, heartbreaking work for the ages.

“A searing, startling novel that sweeps through much of the twentieth century and up to the present conflict with Iraq.” —Lev Grossman, Time
John le Carré's The Spy Who Came In from the Cold secured him a wide reputation, which was consolidated by the acclaim for his trilogy Tinker Tailor Soldier Spy, The Honourable Schoolboy, and Smiley's People. His recent novels include The Tailor of Panama, The Constant Gardener, and Absolute Friends.
"A triumph...A blazingly good novel. Le Carré’s best in years."—David Kipen, San Francisco Chronicle

“A searing, startling novel that sweeps through much of the twentieth century and up to the present conflict with Iraq.”—Lev Grossman, Time

“Unfailingly entertaining...A terrific achievement by the best spy novelist out there—as engrossing, well crafted, and satisfying as anything this observer of the unobserved has produced.”—Matt Konrad, Minneapolis Star Tribune