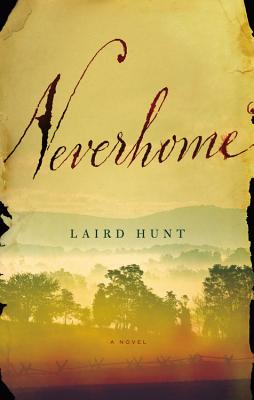 “Leaving her beloved husband behind to tend their Indiana farm, Constance Thompson binds her breasts and dons men's clothing to become Ash, nicknamed 'Gallant Ash' by her fellow Union soldiers. With spare, poetic, transcendent prose, Hunt portrays the horror of the Civil War and the fallout from the trauma experienced by soldiers, their families, and the country at large. Ash is a fascinating and enigmatic character, keeping secrets from everyone she encounters and keeping the reader enthralled as her shocking story unfolds. Neverhome will surely join the ranks of the brilliant novels not just of the Civil War, but of war writ large.”
— Cathy Langer, Tattered Cover Book Store, Denver, CO

She calls herself Ash, but that's not her real name. She is a farmer's faithful wife, but she has left her husband to don the uniform of a Union soldier in the Civil War. Neverhome tells the harrowing story of Ash Thompson during the battle for the South. Through bloodshed and hysteria and heartbreak, she becomes a hero, a folk legend, a madwoman and a traitor to the American cause.

Laird Hunt's dazzling novel throws a light on the adventurous women who chose to fight instead of stay behind. It is also a mystery story: why did Ash leave and her husband stay? Why can she not return? What will she have to go through to make it back home?

In gorgeous prose, Hunt's rebellious young heroine fights her way through history, and back home to her husband, and finally into our hearts.

Laird Hunt is the author of The Evening Road. His previous novel, Neverhome, was a New York Times Book Review Editor's Choice selection, an IndieNext selection, winner of the Grand Prix de Litterature Americaine and The Bridge prize, and a finalist for the Prix Femina Etranger. A resident of Boulder, CO, he is on the faculty in the creative writing PhD program at the University of Denver.

"A spare, beautiful novel, so deeply about America and the language of America that its sentences seem to rise up from the earth itself. Laird Hunt had me under his spell from the first word of Neverhome to the last. Magnificent."—Paul Auster, author of The New York Trilogy and Report from the Interior

"Laird Hunt's new novel is a beguiling and evocative story about love and loss, duty and deceit. Through the assured voice of his narrator and the subtle beauty of his writing, Neverhome took me on a journey so thoroughly engrossed that there were times the pages seemed to turn themselves."—Kevin Powers, author of The Yellow Birds

"The Civil War has given us so many great literary works that I couldn't have imagined a new fictional approach that was both stunningly original and yet utterly natural, even inevitable. But this is just what Laird Hunt brilliantly delivers in his new novel. The key is his central character: in her voice, her personality, her yearning, she deeply touches our shared and enduring humanity. Neverhome is masterful work by one of our finest writers."—Robert Olen Butler, author of the Pulitzer Prize-winning A Good Scent from a Strange Mountain