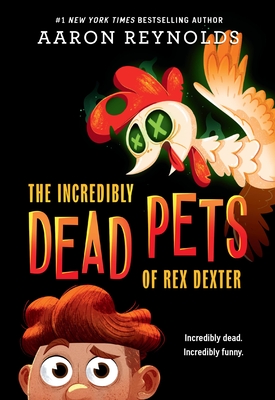 New York Times best-selling author Aaron Reynolds delivers an "entertainingly spooky romp" (Publishers Weekly, starred review) about Rex Dexter, who is itching to have a dog . . . but ends up with a pet chicken.
One hour and fourteen minutes later, the chicken is dead (by a steamroller), Rex is cursed (by the Grim Reaper), and wild animals are haunting Rex's room (hounding him for answers). Even his best friend Darvish is not going to believe this, and that kid believes everything.

Rex's uninvited ghostly guests are a chatty, messy bunch. And they need Rex to solve their mysterious deadly departures from the Middling Falls Zoo before it happens again. But how?

Aaron Reynolds is a New York Times best-selling author and has written many highly acclaimed books for kids, including DUDE!, Creepy Pair of Underwear, Caveboy Dave, and the Caldecott Honor-winning Creepy Carrots. Aaron lives in Chicago with his wife, two kids, four cats, and anywhere between zero and ten goldfish, depending on the day.

Praise for The Incredibly Dead Pets of Rex Dexter:
* "In this entertainingly spooky romp, Reynolds tempers his morbid premise with the absurdity of Rex's situation, the ghostly entourage's distinct personalities, and a hilarious, simultaneously formal and sarcastic, narrative voice."—Publishers Weekly (starred review)

"The mystery has a twist ending that will surprise and satisfy readers who thought they knew what was coming....Purchase where funny books are popular-that's everywhere, right?"—School Library Journal

"Picture-book author Reynolds brings his knack for off-kilter comedy to his first novel in a gleefully entertaining fashion. "—Booklist

"Reynolds is bound to attract fans drawn to overconfident Rex and whatever challenge the Grim Reaper cares to deal him."—BCCB