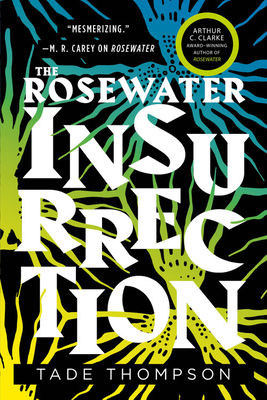 This is book number 2 in the The Wormwood Trilogy series.

All is quiet in the city of Rosewater as it expands on the back of the gargantuan alien Wormwood. Those who know the truth of the invasion keep the secret.

The government agent Aminat, the lover of the retired sensitive Kaaro, is at the forefront of the cold, silent conflict. She must capture a woman who is the key to the survival of the human race. But Aminat is stymied by the machinations of the Mayor of Rosewater and the emergence of an old enemy of Wormwood.

Praise for The Wormwood Trilogy:

"Mesmerising. There are echoes of Neuromancer and Arrival in here, but this astonishing debut is beholden to no one." —M. R. Carey, bestselling author of The Girl with All the Gifts

Tade Thompson is the author of Rosewater, a John W. Campbell Award finalist and winner of the 2019 Arthur C. Clarke Award and the 2017 Nommo Award for African speculative fiction. Born in London to Yoruba parents, he lives and works on the south coast of England as an emergency room psychiatrist.

"I found myself close to tears, the human cost of insurrection laid bare. Thompson's willingness to push himself as a writer, to not just rely on his strengths -- the zippy dialogue, the sharp storytelling -- is the reason I will continue to follow his career, why I will read whatever he writes."—Locus

"Terrific... raises the bar, introducing a number of fascinating new elements into an already intriguing storyline. If you haven't go started on it already this is a series you'll want to get on board with now."—Toronto Star

"Mind-bending.... Alternately epic and almost claustrophobically intimate.... The exciting second half and intriguing ending set the stage for what promises to be a fascinating conclusion."—Publishers Weekly

"Mesmerising. There are echoes of Neuromancer and Arrival in here, but this astonishing debut is beholden to no one."—M. R. Carey on Rosewater

"Nothing short of brilliant.... A captivating, cerebral work of science fiction that may very well signal a new definitive voice in the genre."—Kirkus on Rosewater

"Thompson's genius in displacing his tale of successive xenobiological attacks from the West onto the developing world is matched by his breathtakingly smart prose.... Deeply engrossing."—The Seattle Review of Books on Rosewater

"A sharply satirical, ingenious thriller about an alien invasion that's disturbing familiar. Tade Thompson has built a fascinating world that will suck you in and keep you guessing. This book will eat you alive, and you'll like it."—Annalee Newitz on Rosewater

"One of the most thoughtful and inventive alien contact tales of recent decades."—Locus on Rosewater

"Intriguing Afrofuturistic tale [that] features an incredible mashup of alien contact and human-centered power, delivering a stark and gritty story that will keep readers engaged."—Library Journal

"A strange and unsettling story of psychics, conspiracy, and alien invasion unlike anything I've read before. Masterfully constructed, brimming with ideas and slowly unfolding mystery, Rosewater hurt my brain in the best of ways."—Fonda Lee on Rosewater

"Perfect for fans of William Gibson's Neuromancer, this twisty, captivating page-turner explores the fragility of the mind and how memory constructs identity."—BookPage on Rosewater

"Inventive aliens and realistic-feeling invasion... keen observations of how easily people ignore and accept what should be terrifying... intriguing characters (many of them women) who have lives of their own beyond the pages... fascinating."—Strange Horizons on Rosewater

"One of the most imaginative alien invasion scenarios I have come across."—Aliette de Bodard, Nebula and BSFA award-winning author, on Rosewater

"Quite simply one of best books I have read for quite some time."—SFCrowsnest on Rosewater

"As strange, vivid and intricate as the alien biosphere at its heart, Rosewater is a fabulous book and Tade Thompson is a writer of enormous heart and talent. Just brilliant."—Dave Hutchinson on Rosewater

"Inventive and creepy... revolutionary."—Ozy on Rosewater

"Original, entertaining, and food for thought. Tade Thompson is an exciting new voice in our field and I can't wait to read more of his work."—Pat Cadigan on Rosewater

"Part thriller, part mystery and part phantasmagoric journey across a strange yet not-too-distant future, and reminiscent at times of both Roger Zelazny and Nnedi Okorafor, Rosewater is the hardboiled, Nigerian alien invasion story you always wanted."—Lavie Tidhar on Rosewater