Once a Thief (Hardcover) 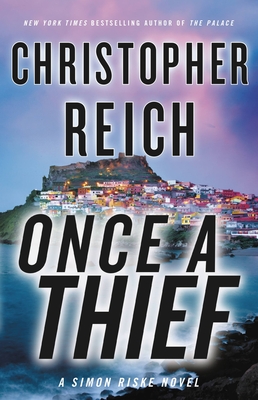 Facing enemies at every turn, private spy Simon Riske dashes across Europe to find the truth behind a mysterious investor in this high-stakes international espionage series for which "comparison to the Bond novels is apt in many ways." (Booklist)

Simon Riske sits in sun-dappled Napa Valley, toasting the record hundred-million-dollar sale of a rare 1963 Ferrari which he restored himself. The buyer, a sophisticated French woman, Sylvie Bettencourt, has purchased the car for an unnamed client whose anonymity she will guard at all costs. Riske enjoys her company and the flowing champagne until Sylvie’s formidable Russian bodyguard storms in, claiming the vehicle is a fake. Riske is given an ultimatum. Prove the car is the real thing…or else.

Meanwhile, in Lugano, Switzerland, Carl Bildt, banker to the rich and nefarious, is killed by a powerful car bomb, moments before he can deliver evidence to the authorities and disappear into witness protection. His beautiful and headstrong daughter, Anna, rushes to Switzerland to investigate her father’s violent death.

As Simon Riske strives to prove the Ferraris’ authenticity and look deeper into Sylvie’s past–and the identity of her client—he crosses paths with Anna Bildt and discovers they have an enemy in common.  From the bustling streets of London to a secret outpost high in the French Alps, from the freeports of Corsica to the glittering beaches of the Costa Smeralda, the Emerald Coast, of Sardinia, Riske and Anna find themselves players in a deadly game, where billions of dollars change hands and knowledge is paid for with your life.

Told with Reich’s signature stylish prose, clever plotting, and pulse-pounding action sequences, Once a Thief, is sure to appeal to longtime fans of the series and newcomers alike. Riske may be a bit older, showing a little wear and tear, but his desire to get the job done at any cost is stronger than ever.

Christopher Reich is the New York Times bestselling author of The Take, Numbered Account, Rules of Deception, Rules of Vengeance, Rules of Betrayal, and many other thrillers. His novel The Patriots Club won the International Thriller Writers award for Best Novel in 2006. He lives in Encinitas, California.

One of the NY Post's best books of the week

“Riske paints his characters in broad strokes, much in the manner of Ian Fleming in the Bond novels, giving us the big picture and letting us fill in the small details from our imaginations. In fact, comparison to the Bond novels is apt in many ways: the dashing spy, the snappy dialogue, the glamorous locales (in this case, Corsica, the French Alps, and Switzerland, among others). An entertaining escapist adventure.”—Booklist

"Once a Thief is a good read and moves at a good clip. Reich’s readers who are fans of his previous Simon Riske books will enjoy this one and will look forward to Riske’s next adventure"—NY Journal of Books

"The exotic locales and plot twists, not to mention enough action to keep you turning each page, make Once A Thief an enjoyable experience."—BookReporter

“Heart-pounding…Reich combines great action with surprises readers won’t see coming. One doesn’t have to care much about cars or high finance to enjoy this cinematic thriller.”—Publishers Weekly

Praise for Chris Reich, and the Simon Riske series!—`

"An out-of-control joyride for those who like their heroes flawed, scarred, and on the edge. Reich has created an irresistible character that will leave readers both wincing and cheering with every page."

"Likable, rascally, and suave, Riske is as distinctive as Reich's other series lead, Jonathan Ransom."