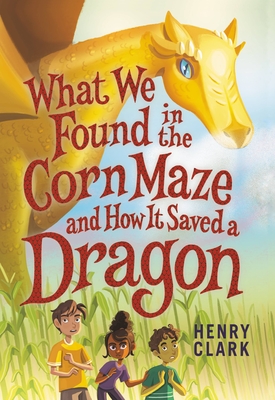 
Usually Ships in 1-5 Days
When three kids discover a book of magic spells that can only be cast during a few short minutes a day, they'll need all the time they can get to save a dying magical world, its last dragon, and themselves. An ordinary day turns extraordinary when twelve-year-old Cal witnesses his neighbor Modesty summon a slew of lost coins without lifting a finger. Turns out she has a secret manual of magic spells . . . but they only work sometimes. And they're the most boring spells ever: To Change the Color of a Room, To Repair a Chimney, To Walk With Stilts, To Untangle Yarn. Useless! But when Cal, his friend Drew, and Modesty are suddenly transported to the world the spells come from—a world that's about to lose its last dragon—they'll have to find a way to use the oddly specific incantations to save the day, if only they can figure out when magic works. From the inventive mind of Henry Clark comes a hilariously wacky adventure about magic, friendship, a lookout tower come to life, a maze in the shape of a dragon, an actual dragon named Phlogiston, and lots and lots of popcorn.
Henry Clark is the author of What We Found in the Sofa and How It Saved the World and The Book That Proves Time Travel Happens. He has contributed articles to MAD magazine and published fiction in Isaac Asimov's Science Fiction Magazine in addition to acting at Old Bethpage Village Restoration, a living-history museum in New York. He now lives in St. Augustine, Florida.
A Washington Post Kids Post Summer Book Club Pick

* "Tongue firmly in cheek, Clark propels his squabbling eco-crusaders through a rush of misadventures that test their credibility as well as ingenuity."—Booklist, starred review

"A good choice for fans of The Phantom Tollbooth and The Westing Game and Chris Grabenstein's Mr. Lemoncello books.... A smart kid's goofball adventure."—Kirkus Reviews

"This adventure shows what you can accomplish with teamwork. If you enjoyed the classic The Phantom Tollbooth, you will like this tale."
—The Week Junior