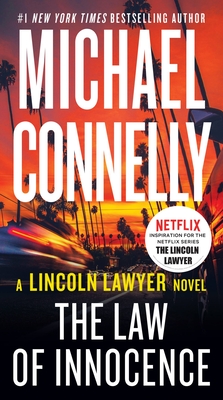 This is book number 6 in the A Lincoln Lawyer Novel series.

Lincoln Lawyer Mickey Haller is back on the job in this heart-stopping thriller from a renowned #1 New York Times bestselling author.


On the night he celebrates a big win, defense attorney Mickey Haller is pulled over by police, who find the body of a former client in the trunk of his Lincoln. Haller is immediately charged with murder but can’t post the exorbitant $5 million bail slapped on him by a vindictive judge.

Mickey elects to represent himself and is forced to mount his defense from his jail cell in the Twin Towers Correctional Center in downtown Los Angeles. All the while he needs to look over his shoulder—as an officer of the court he is an instant target, and he makes few friends when he reveals a corruption plot within the jail.

But the bigger plot is the one against him. Haller knows he’s been framed, whether by a new enemy or an old one. As his trusted team, including his half-brother, Harry Bosch, investigates, Haller must use all his skills in the courtroom to counter the damning evidence against him.

Even if he can obtain a not-guilty verdict, Mickey understands that it won’t be enough. In order to be truly exonerated, he must find out who really committed the murder and why. That is the law of innocence.

In his highest stakes case yet, the Lincoln Lawyer fights for his life and proves again why he is “a worthy colleague of Atticus Finch . . . in the front of the pack in the legal thriller game” (Los Angeles Times).

Michael Connelly is the author of thirty-four previous novels, including the New York Times bestsellers, Fair Warning, The Night Fire, and Dark Sacred Night. His books, which include the Harry Bosch series, the Lincoln Lawyer series, and the Renée Ballard series, have sold more than eighty million copies worldwide. Connelly is a former newspaper reporter who has won numerous awards for his journalism and his novels. He is the executive producer of Bosch, starring Titus Welliver, and the creator and host of the podcast Murder Book. He spends his time in California and Florida.

“If you’re not already addicted to Mickey, his ex-wives and his brilliant half brother, investigator Harry Bosch, this perfectly constructed legal thriller will get you there.”—People (Book of the Week)

“One of the finest legal thrillers of the last decade… Connelly’s novels have long been distinguished by his mastery of the complexities of the justice system including an ability to get police and courtroom procedures exactly right.”—Bruce DeSilva, Associated Press

“A wonderfully twisty legal thriller… As always, Connelly does a splendid job with both the courtroom drama and the suspenseful, often dangerous process behind it.”—Colette Bancroft, Tampa Bay Times

“Gripping… Fans are in for another treat from the blockbuster author.”—Christina Ianzito, AARP

"A tightly crafted thriller, with some nice crossover flair to boot (fans of Harry Bosch always enjoy seeing him show up in new places)."—Dwyer Murphy, Crimereads