Stories from the Edge (Paperback) 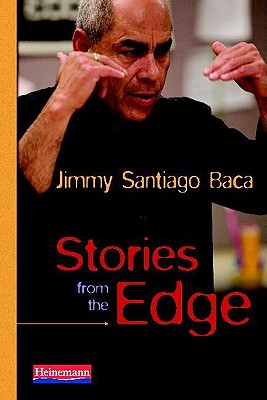 Stories from the Edge (Paperback)

Stories from the Edge enriches and extends Jimmy Santiago Baca's critically acclaimed memoir, A Place to Stand. Early stories elaborate on his travails as an abandoned child in an orphanage. Later stories draw on Baca's post-prison life as a writer and his ongoing work with struggling adolescents, prisoners, and society's dispossessed. Centered around conflicts and life-altering choices, Baca's gripping personal narratives will resonate with adolescents and adults alike.

Learn more about the companion teacher's guide, Adolescents on the Edge. Save $ with a Teacher's Pack and Student Bundle.

As an abandoned child and a runaway Jimmy Santiago Baca's childhood was spent on the margins of society. In early adulthood he reverted again and again to a life of crime, eventually being sentenced to five years in a maximum-security prison. After years of hellish suffering on administrative segregation and in isolation, he emerges from prison a voracious reader and a skilled, self-taught writer. He miraculously discovers a deep attachment to poetry that becomes his saving grace. Now an accomplished and celebrated author, Baca is the recipient of many honors including the Pushcart Prize, the American Book Award, the Hispanic Heritage Award, and for his memoir, A Place to Stand, he received the prestigious International Prize. In 2006 he won the Cornelius P. Turner Award, a national award that annually recognizes one GED graduate who has made outstanding contributions to society in education, justice, health, public service, and social welfare. Devoting his post-prison life to writing and teaching others who are overcoming hardship, Baca has conducted hundreds of writing workshops in prisons, community centers, libraries, and universities. In 2005 he created Cedar Tree, Inc., a nonprofit foundation dedicated to helping others improve their lives through education. Other books by Jimmy Santiago Baca Poetry Selected Poems/Poemas Selectos Rita and Julia Spring Poems Along the Rio Grande Winter Poems Along the Rio Grande C-Train and Thirteen Mexicans Healing Earthquakes Que Linda La Brisa/How Beautiful the Breeze Is Immigrants in Our Own Land Black Mesa Poems Martin and Meditations on the South Valley Short Stories and Essays Adolescents on the Edge / Stories from the Edge Working in the Dark The Importance of a Piece of Paper Breaking Bread with Darkness Novel A Glass of Water Memoir A Place to Stand Film Blood In/Blood Out Late Blossoms Lost Voices Moving the River Back Home