Desert Solitaire: A Season in the Wilderness (Mass Market) 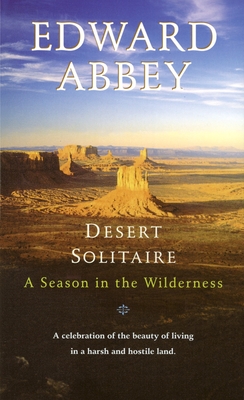 Desert Solitaire: A Season in the Wilderness (Mass Market)

“This is not primarily a book about the desert,” writes Edward Abbey in his introduction. “In recording my impressions of the natural scene I have striven above all for accuracy, since I believe that there is a kind of poetry, even a kind of truth, in simple fact. But the desertis a vast world, an oceanic world, as deep in its way and complex and various as the sea. Language makes a mighty loose net with which to go fishing for simple facts, when facts are infinite. If a man knew enough he could write a whole book about the juniper tree. Not juniper trees in general but that one particular juniper tree which grows from a ledge of naked sandstone near the old entrance to Arches National Monument. What I have tried to do then is something a bit different. Since you cannot get the desert into a book any more than a fisherman can haul up the sea with his nets, I have tried to create a world of words in which the desert figures more as medium than as material. Not imitation but evocation has been the goal.”
Edward Abbey, a self-proclaimed “agrarian anarchist,” was hailed as the “Thoreau of the American West.” Known nationally as a champion of the individual and one of America’s foremost defenders of the natural environment, he was the author of twenty books, both fiction and nonfiction, including Desert Solitaire, The Monkey Wrench Gang, and The Journey Home. In 1989, at the age of sixty-two, Edward Abbey died in Oracle, Arizona.
“This book may well seem like a ride on a bucking bronco. It is rough, tough, combative. The author is a rebel and an eloquent loner. His is a passionately felt, deeply poetic book. It has philosophy. It has humor. It has its share of nerve-tingling adventures . . . set down in a lean, racing prose, in a close-knit style of power and beauty.”—Edwin Way Teale, The New York Times Book Review