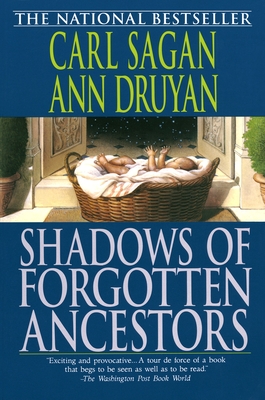 NATIONAL BESTSELLER • “Exciting and provocative . . . A tour de force of a book that begs to be seen as well as to be read.”—The Washington Post Book World

World renowned scientist Carl Sagan and acclaimed author Ann Druyan have written a Roots for the human species, a lucid and riveting account of how humans got to be the way we are. Shadows of Forgotten Ancestors is a thrilling saga that starts with the origin of the Earth. It shows with humor and drama that many of our key traits—self-awareness, technology, family ties, submission to authority, hatred for those a little different from ourselves, reason, and ethics—are rooted in the deep past, and illuminated by our kinship with other animals.

Sagan and Druyan conduct a breathtaking journey through space and time, zeroing in on critical turning points in evolutionary history, and tracing the origins of sex, altruism, violence, rape, and dominance. Their book culminates in a stunningly original examination of the connection between primate and human traits. Astonishing in its scope, brilliant in its insights, and an absolutely compelling read, Shadows of Forgotten Ancestors is a triumph of popular science.

Carl Sagan served as the David Duncan Professor of Astronomy and Space Sciences and Director of the Laboratory for Planetary Studies at Cornell University. He played a leading role in the Mariner, Viking, Voyager, and Galileo spacecraft expeditions, for which he received the NASA Medals for Exceptional Scientific Achievement and (twice) for Distinguished Public Service.

His Emmy- and Peabody–winning television series, Cosmos, became the most widely watched series in the history of American public television. The accompanying book, also called Cosmos, is one of the bestselling science books ever published in the English language. Dr. Sagan received the Pulitzer Prize, the Oersted Medal, and many other awards—including twenty honorary degrees from American colleges and universities—for his contributions to science, literature, education, and the preservation of the environment. In their posthumous award to Dr. Sagan of their highest honor, the National Science Foundation declared that his “research transformed planetary science . . . his gifts to mankind were infinite." Dr. Sagan died on December 20, 1996.