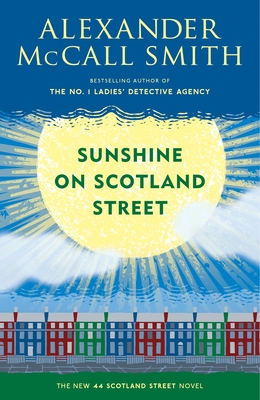 This is book number 8 in the 44 Scotland Street Series series.

The residents and neighbors of 44 Scotland Street and the city of Edinburgh come to vivid life in these gently satirical, wonderfully perceptive serial novels, featuring six-year-old Bertie, a remarkably precocious boy—just ask his mother.

From social media to the finer points of human behavior, this episode of Alexander McCall Smith's popular 44 Scotland Street series provides an entertaining commentary on a small corner of modern life in Edinburgh where, contrary to received wisdom, the sun nearly always shines.

Angus Lordie and Domenica Macdonald are finally tying the knot. Unsurprisingly, Angus is not quite prepared and averting a wedding-day disaster falls to his best man, Matthew. When the newlyweds finally head off on their honeymoon, Angus's dog Cyril goes to stay with the Pollocks—to the delight of one member of the family, and the utter despair of another. The long-suffering Bertie knows firsthand how stringent his mother's rules can be, and he resolves to help Cyril set off on an adventure. Meanwhile, Big Lou becomes a viral Internet sensation, and the incurable narcissist Bruce meets his match in the form of a doppelganger neighbor, who proposes a plan that could change both their lives.

ALEXANDER McCALL SMITH is the author of the No. 1 Ladies' Detective Agency series, the Isabel Dalhousie series, the Portuguese Irregular Verbs series, the 44 Scotland Street series, and the Corduroy Mansions series. He is professor emeritus of medical law at the University of Edinburgh in Scotland and has served with many national and international organizations concerned with bioethics. He was born in what is now known as Zimbabwe and was a law professor at the University of Botswana. He lives in Scotland. Visit his website at www.alexandermccallsmith.com.

"McCall Smith gives us each of his characters’ points of view, moving deftly from one to the other. . . . Advancing the action (this latest has a wedding, a doppelgänger, and the continuing adventures of Matthew and Elspeth and the triplet infants) as we learn exactly what characters are thinking of each other and themselves. Humor and insight abound." --Booklist (starred review)

"A crew that’s endlessly open to adventures while remaining immitigably themselves." --Kirkus Reviews

“Written with abundant wit . . . [and] equally large dollops of wisdom too.”  —Scotland on Sunday

“McCall Smith’s assessments of fellow humans are piercing and profound. . . . [His] depictions of Edinburgh are vivid and seamless.” —San Francisco Chronicle

“The most genial of writers and the most gentle of satirists. . . . [The] characters are great fun . . . [and] McCall Smith treats all of them with affection.” —Rocky Mountain News