The Mist in the Mirror (Paperback) 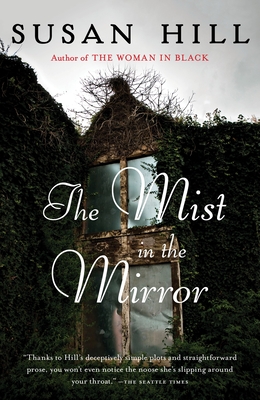 The Mist in the Mirror (Paperback)


Email or call for price.
A chilling, classically-inspired ghost story from Susan Hill, our reigning mistress of spine-tingling fiction.

For the last twenty years Sir James Monmouth has journeyed all over the globe in the footsteps of his hero, the great pioneering traveler Conrad Vane. In an effort to learn more about Vane’s early life—and his own—Sir James sets off for the remote Kittiscar Hall on a cold and rainy winter night. But he soon begins to feel as though something is warning him away at every turn; there are the intense feelings of being watched and the strange apparitions of a sad little boy. And as he learns more about his hero’s past, he discovers that they are only the beginning, for Kittiscar Hall is hiding terrible secret that will bind their lives together in ways he could never have imagined.
Susan Hill has been a professional writer for over fifty years. Her books have won the Whitbread, the John Llewellyn Prize, and the W. Somerset Maugham Award, and have been shortlisted for the Booker Prize. Her novels include The Small Hand, Dolly, Strange Meeting, I’m the King of the Castle and A Kind Man, and she has also published collections of short stories and two autobiographies. Her ghost story, The Woman in Black, has been running in London’s West End since 1988. Susan is married with two adult daughters and lives in North Norfolk.
"For those who devour ghost stories, this author has provided the perfect one. . . . Susan Hill has forever left satisfied readers in her wake. Her excellent, cold yet not horrific, writing style is extremely unique. Many readers who pick up this gem will go back and read Hill’s earlier books, and become extremely loyal fans."
—Suspense magazine

"Thanks to Hill’s deceptively simple plots and straightforward prose, you won’t even notice the noose she’s slipping around your throat."
—The Seattle Times

"There’s nothing like a good old-fashioned ghost story, and the masterful Hill authentically channels such giants of the Gothic genre as Poe and Doyle in this eerily atmospheric yarn of restless spirits, both temporal and corporeal."
—Booklist

"Penetrating psychological insight and believable supernatural intrusions into the commonplace recommend Hill’s subtle ghost story. . . . Hill energizes eerie atmosphere and formal execution with an emphasis on sensitive characterization and psychological reaction. The effect is devastatingly elegant, eschewing shock for lingering unease and a sense of inevitable doom. . . . A delight for aficionados and newcomers alike."
—Publishers Weekly