Secrets of the Sea: The Story of Jeanne Power, Revolutionary Marine Scientist (Hardcover) 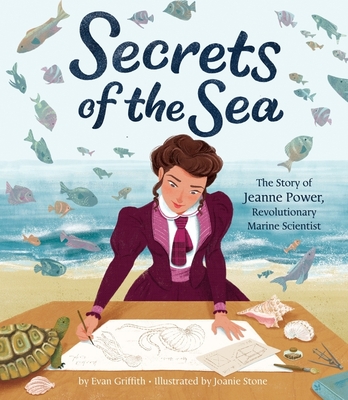 Secrets of the Sea: The Story of Jeanne Power, Revolutionary Marine Scientist (Hardcover)


Usually Ships in 1-5 Days
The curiosity, drive, and perseverance of the nineteenth-century woman scientist who pioneered the use of aquariums to study ocean life are celebrated in this gorgeous, empowering picture book.

How did a nineteenth-century dressmaker revolutionize science? Jeanne Power was creative: she wanted to learn about the creatures that swim beneath the ocean waves, so she built glass tanks and changed the way we study underwater life forever. Jeanne Power was groundbreaking: she solved mysteries of sea animals and published her findings at a time when few of women’s contributions to science were acknowledged. Jeanne Power was persistent: when records of her research were lost, she set to work repeating her studies. And when men tried to take credit for her achievements, she stood firm and insisted on the recognition due to her.

Jeanne Power was inspiring, and the legacy of this pioneering marine scientist lives on in every aquarium.

Evan Griffith is the author of the picture book Secrets of the Sea: The Story of Jeanne Power, Revolutionary Marine Scientist. Manatee Summer is his middle grade debut. He received his MFA in writing for children and young adults at the Vermont College of Fine Arts. He lives in Austin, TX. Visit Evan online at www.evangriffithbooks.com.

Joanie Stone has worked in animation as well as in children's books. Picture Books about strong women she has illustrated include Secrets of the Sea: Revolutionary Marine Scientist Jeanne Power; Me and the Sky: Beverly Bass, Pioneering Pilot, and Unbeatable Betty: Betty Robinson, the First Female Olympic Track and Field Gold Medalist. She lives in Virginia with her family. www.joaniestone.com, Instagram: @joaniestoneart

★ "Each spread features rich illustrations that capture the wonder and mystery of the sea, complemented by Power’s experiments, prototyping, and observations....The text and images are accessible and easy to understand....An excellent purchase for elementary school collections because of the focus on an unsung female scientist paired with solid back matter and beautiful illustrations."—School Library Journal, STARRED review   "Among a growing number of young people’s biographies that take note of the difficulties faced by women in the sciences, this colorful picture book offers a well-organized, informative text and lively digital illustrations....An appealing biography for children intrigued by sea creatures, and an inspiring choice for future marine biologists."—Booklist   "Griffith has applied years of editing experience to his debut picture book, selecting a career highpoint for his smoothly told narrative and offering more substance for slightly older readers in backmatter.... An appealing introduction to a STEM trailblazer."—Kirkus   "Griffith employs a candid tone to showcase the real-life story of Jeanne Power, who made groundbreaking marine discoveries after moving from Paris to Sicily in 1818.... Stone contributes animation-style digital illustrations in a rich color palette. This is an informative, well-paced narrative biography featuring a lesser-known historical figure who persevered."—Publishers Weekly   "This compelling picture-book biography of a trailblazing woman scientist is enhanced by period-setting illustrations featuring blues, greens, and beachy browns." —The Horn Book  —