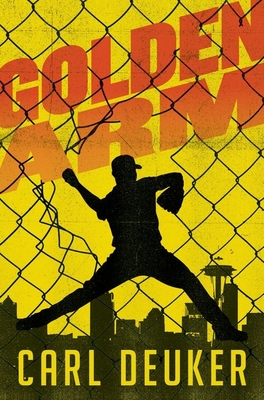 In this riveting story about baseball and brotherhood, a boy from the wrong side of the tracks finds himself pitching his way out of poverty—one strike at a time. By “a premier author of provocative YA sports novels” (The Bulletin).

Lazarus “Laz” Weathers has always been shy, and his issue with stuttering when he speaks hasn’t helped. Stuck in a Seattle trailer park, Laz finds baseball helps him escape from the world of poverty and drugs. When he gets an opportunity to pitch for the rich kids across town, he has a chance to get drafted by the major leagues.

But playing for the other team means leaving behind his family, including Antonio, Laz’s younger brother, who more and more, seems to be drawn to the dark world of the Jet City’s drug ring. Now Laz will have to choose between being the star pitcher he always dreamed of becoming and the team player his family needs.

Carl Deuker is a celebrated author of “top-flight sports writing matched to uncommonly perceptive coming-of-age stories” (Kirkus Reviews). He describes his younger self as a classic second-stringer: “I was too slow and too short for basketball; I was too small for football, a little too chicken to hang in there against the best fastballs. So, by my senior year the only sport I was still playing was golf.” He was a teacher for many years in the Seattle area, where he now lives with his wife.

"Deuker weaves an interesting plot dealing with socio-economic inequality and drug use into a cast of varied characters. An entertaining visit to the ballpark." — Kirkus Reviews

"Acclaimed sportswriter Deuker deftly weaves baseball action into a solid coming-of-age tale, as Laz navigates the class divide when the well-off Thurmans take him in when he switches schools." — School Library Journal

"Readers will be plenty worried about Laz’s future….cheer[ing] for Laz’s next longshot chance.” — Bulletin of the Center for Children’s Books