The Army and Ideology in Indonesia: From Dwifungsi to Bela Negara (Routledge Contemporary Southeast Asia) (Hardcover) 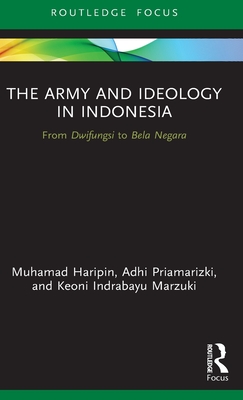 This book is an analysis of Indonesia's civil-military relations in the post-1998 reform era. It focuses on the political thinking of the Indonesian Army during the time of democratic consolidation.

The book examines the army (Tentara Nasional Indonesia Angkatan Darat, TNI AD), a pivotal player in the political scene of Indonesian state, and the aspect of military ideology development. Based on in-depth interviews with civilian and military figures and applying the methodology of utilised process tracing and empirical analysis surrounding the appearance of military thinking, the book argues that the Indonesian military pursues to sustain its political power by propagating a set of values construed as moral compass for all members of society. Specifically, the book discusses the origins and impacts of 'proxy war' and 'bela negara' ('defend the state'), which was promoted by former TNI Commander Gatot Nurmantyo (2015-2017) and former Defence Minister Ryamizard Ryacudu (2014-2019). The authors demonstrate that both ideologies facilitate expansion of the military's influence in all aspects of life and protection of its corporate interests in the age of democracy.

Offering insights for theoretical discussion on the influence of military ideology to civil-military relations, particularly in the post-authoritarian period, this book will be of interest to academics and policy makers in the fields of Southeast Asian Politics, Asian Politics and Civil-Military Relations.