Rivals in the Gulf: Yusuf Al-Qaradawi, Abdullah Bin Bayyah, and the Qatar-Uae Contest Over the Arab Spring and the Gulf Crisis (Paperback) 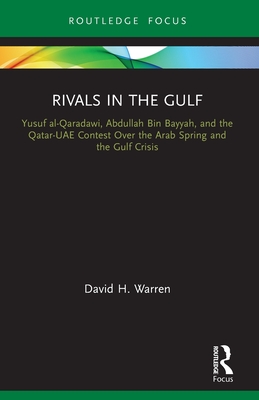 Rivals in the Gulf: Yusuf al-Qaradawi, Abdullah Bin Bayyah, and the Qatar-UAE Contest Over the Arab Spring and the Gulf Crisis details the relationships between the Egyptian Shaykh Yusuf al-Qaradawi and the Al Thani royal family in Qatar, and between the Mauritanian Shaykh Abdullah Bin Bayyah and the Al Nahyans, the rulers of Abu Dhabi and senior royal family in the United Arab Emirates. These relationships stretch back decades, to the early 1960s and 1970s respectively.

Using this history as a foundation, the book examines the connections between Qaradawi's and Bin Bayyah's rival projects and the development of Qatar's and the UAE's competing state-brands and foreign policies. It raises questions about how to theorize the relationships between the Muslim scholarly-elite (the ulama) and the nation-state. Over the course of the Arab Spring and the Gulf Crisis, Qaradawi and Bin Bayyah shaped the Al Thani's and Al Nahyan's competing ideologies in important ways.

Offering new ways for academics to think about Doha and Abu Dhabi as hegemonic centers of Islamic scholarly authority alongside historical centers of learning such as Cairo, Medina, or Qom, this book will appeal to those with an interest in modern Islamic authority, the ulama, Gulf politics, as well as the Arab Spring and its aftermath.