The Ten-Cent Plague: The Great Comic-Book Scare and How It Changed America (Hardcover) 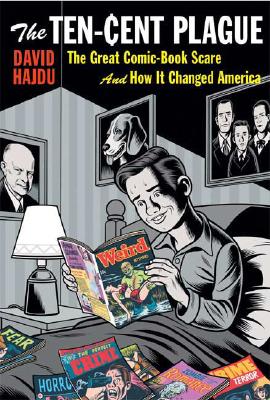 In the years between World War II and the emergence of television as a mass medium, American popular culture as we know it was first created--in the pulpy, boldly illustrated pages of comic books. No sooner had this new culture emerged than it was beaten down by church groups, community bluestockings, and a McCarthyish Congress--only to resurface with a crooked smile on its face in Mad magazine.

The story of the rise and fall of those comic books has never been fully told--until The Ten-Cent Plague. David Hajdu's remarkable new book vividly opens up the lost world of comic books, its creativity, irreverence, and suspicion of authority.

When we picture the 1950s, we hear the sound of early rock and roll. The Ten-Cent Plague shows how--years before music--comics brought on a clash between children and their parents, between prewar and postwar standards. Created by outsiders from the tenements, garish, shameless, and often shocking, comics spoke to young people and provided the guardians of mainstream culture with a big target. Parents, teachers, and complicit kids burned comics in public bonfires. Cities passed laws to outlaw comics. Congress took action with televised hearings that nearly destroyed the careers of hundreds of artists and writers.
The Ten-Cent Plague radically revises common notions of popular culture, the generation gap, and the divide between "high" and "low" art. As he did with the lives of Billy Strayhorn and Duke Ellington (in Lush Life) and Bob Dylan and his circle (in Positively 4th Street), Hajdu brings a place, a time, and a milieu unforgettably back to life.

“Who knew?  The right was focused on the Red Menace and the left on the Red Scare.  But, if you want to understand what was really going on in the mad, mad, mad world of the 1950's you should read David Hajdu's hilarious and harrowing account of The Great Comic Book  Scare.  Hajdu’s tale is lurid, absurd, existential, weird, and scary, and contains real-life superheros and supervillains, and there is nothing funny about it.” —Victor Navasky, author of Naming Names

“THE TEN-CENT PLAGUE is about the best account yet of comics in America, an instant classic of cultural history.” —Geoffrey O’Brien, author of Sonata for Jukebox  “Every once in a while, moral panic, innuendo, and fear bubble up from the depths of our culture to create waves of destructive indignation and accusation. David Hajdu's fascinating new book tracks one of the stranger and most significant of these episodes, now forgotten, with exactness, clarity, and serious wit, which is the best kind. He illuminates the lives of his protagonists -- from pompous, on-the-make censors to cracked comic book geniuses -- with his own graphic powers, as well as his intense intellectual curiosity. The book is a rarity, vividly depicting a noirish 1950's America but without a trace of irony or nostalgia.” --Sean Wilentz, Professor of History, Princeton University