The Riemann Hypothesis: The Greatest Unsolved Problem in Mathematics (Paperback) 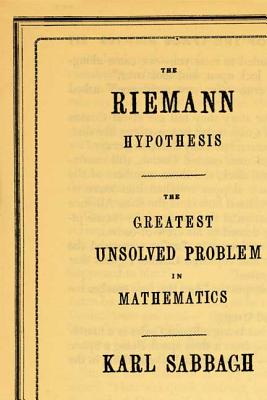 Since 1859, when the shy German mathematician Bernhard Riemann wrote an eight-page article giving a possible answer to a problem that had tormented mathematical minds for centuries, the world's greatest mathematicians have been fascinated, infuriated, and obsessed with proving the Riemann hypothesis. They speak of it in awed terms and consider it to be an even more difficult problem than Fermat's last theorem, which was finally proven by Andrew Wiles in 1995.

In The Riemann Hypothesis, acclaimed author Karl Sabbagh interviews some of the world's finest mathematicians who have spent their lives working on the problem--and whose approaches to meeting the challenges thrown up by the hypothesis are as diverse as their personalities.

Wryly humorous, lively, accessible and comprehensive, The Riemann Hypothesis is a compelling exploration of the people who do math and the ideas that motivate them to the brink of obsession--and a profound meditation on the ultimate meaning of mathematics.

Karl Sabbagh is the author of seven books, including A Rum Affair (FSG, 2000). He lives near Stratford-upon-Avon in England.