The Border Trilogy: All the Pretty Horses, The Crossing, Cities of the Plain (Everyman's Library Contemporary Classics Series) (Hardcover) 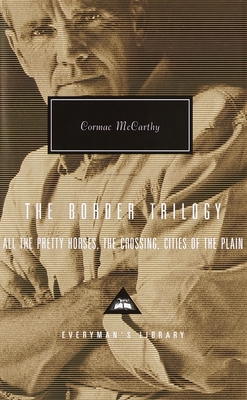 From the acclaimed Pulitzer Prize–winner and one of America's greatest writers: available together in one volume, the three novels of Cormac McCarthy's award-winning and bestselling Border Trilogy constitute a genuine American epic.

"An American classic to stand with the finest literary achievements of the century." —San Francisco Chronicle

Beginning with All the Pretty Horses and continuing through The Crossing and Cities of the Plain, McCarthy chronicles the lives of two young men coming of age in the Southwest and Mexico, poised on the edge of a world about to change forever. Hauntingly beautiful, filled with sorrow and humor, The Border Trilogy is a masterful elegy for the American frontier.

The novels of the American writer, Cormac McCarthy, have received a number of literary awards, including the Pulitzer Prize, the National Book Award, and the National Book Critics Circle Award. His works adapted to film include All the Pretty Horses, The Road, and No Country for Old Men—the latter film receiving four Academy Awards, including the award for Best Picture.

"An American classic to stand with the finest literary achievements of the century." —San Francisco Chronicle