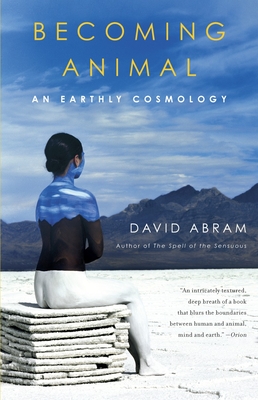 David Abram’s first book, The Spell of the Sensuous has become a classic of environmental literature. Now he returns with a startling exploration of our human entanglement with the rest of nature.

As the climate veers toward catastrophe, the innumerable losses cascading through the biosphere make vividly evident the need for a metamorphosis in our relation to the living land. For too long we’ve ignored the wild intelligence of our bodies, taking our primary truths from technologies that hold the living world at a distance. Abram’s writing subverts this distance, drawing readers ever closer to their animal senses in order to explore, from within, the elemental kinship between the human body and the breathing Earth. The shape-shifting of ravens, the erotic nature of gravity, the eloquence of thunder, the pleasures of being edible: all have their place in this book.

David Abram is an ecologist, anthropologist, and philosopher who lectures and teaches widely around the world. His prior book, The Spell of the Sensuous: Perception and Language in a More-than-Human World, helped catalyze the emergence of several new disciplines, including the burgeoning field of ecopsychology. The recipient of a Lannan Literary Award for Nonfiction, David was named by both the Utne Reader and the British journal Resurgence as one of a hundred visionaries transforming contemporary culture. His writings on the cultural causes and consequences of environmental disarray are published in numerous magazines, scholarly journals, and anthologies. A co-founder of the Alliance for Wild Ethics (AWE), David lives with his family in the foothills of the southern Rockies.

“A wild book in every sense of the word, full of stories that will leave you trembling, but even fuller of ideas that will send you out into the world with new eyes.” —Bill McKibben, author of Eaarth

“This book is like a prehistoric cave. If you have the nerve to enter it and you get used to the dark, you’ll discover things about storytelling which are startling, urgent and deeply true. Things each of us once knew, but forgot when we were born into the 19th and 20th centuries. Extraordinary rediscoveries!” —John Berger, author of Ways of Seeing and Why Look at Animals

“I cannot imagine another book that so gently and so persuasively alters how we look at ourselves.” —Richard Louv, author of The Nature Principle

“One of the most compelling and important ecology books in decades.” —Rex Weyler, co-founder of Greenpeace International

“A truly alchemical book. . . . Those of us who still hope for a revolutionary change in our thinking toward animals, the living land and the climate will welcome this book. Abram is an audacious thinker, a true visionary, and, really, just a damn good nature writer.” —San Francisco Book Review

“An intricately textured, deep breath of a book that blurs the boundaries between human and animal, mind and earth. Prose as lush as a moss-draped rain forest and as luminous as a high desert night. . . Deeply resonant with indigenous ways of knowing, Abram lets us listen in on wordless conversations with ancient boulders, walruses,
birds, and roof beams. His profound recognition of intelligences other than our own enables us to enter into reciprocal symbioses that can, in turn, sustain the world. Becoming Animal illuminates a way forward in restoring relationship with the earth, led by our vibrant animal bodies to re-inhabit the glittering world." —Orion

“A stunning, compelling journey into embodied, earthly intelligence, Becoming Animal is philosophy at its engaging best. Prepare for a wild, profound ride into the essence of the human animal—an essence embedded in communion with the Earth. A must read for anyone concerned about the future of the planet and ourselves.” —Kierán Suckling, co-founder and Executive Director, Center for Biological Diversity

“If we are to survive—indeed, if we are to stop the dominant culture from killing the planet—it will be in great measure because of brave and brilliant beings like David Abram. This is a beautifully written, deeply moving, and important book.” —Derrick Jensen, author of A Language Older Than Words and Endgame

Becoming Animal brings us home to ourselves as living organs of this wild planet. Its teachings leap off the page and translate immediately into lived experience. —Joanna Macy, Buddhist scholar and activist

“Without doubt one of America’s greatest nature writers, one who ably follows in the footsteps of Muir, Thoreau and Leopold. . . .[A] book of such transformative potential that it needs to be read twice in quick succession to get the full benefit. . . . The language is luminous, the style hypnotic. Abram weaves a spell that brings the world alive.”
—Resurgence

“Pure enthusiasm drives Abram to explore the yearning of our body for the larger body of Earth. . . . [Abram] brings the magician’s sense of mystery and playful surprise. . . His celebratory embrace of all that surrounds him is refreshing in the extreme.”
—Kirkus Reviews

“As with many deeply original—and radical—books, this work may startle, even provoke the reader in its electric reversal of conventional thought. . . . [T]his is a portrait of the artist as a young raven, arguing, with all the subtlety of his mind, for the mindedness of the body. An exercise of uncanny imagination.” —Jay Griffiths, author of Wild

“This brave and magical book summons wild wonder to remind us who we are.”
—Amory B. Lovins, Chief Scientist, Rocky Mountain Institute

“Speculative, learned, and always ‘lucid and precise’ as the eye of the vulture that confronted him once on a cliff ledge, Abram has one of those rare minds which, like the mind of a musician or a great mathematician, fuses dreaminess with smarts.” —The Village Voice

“Refreshing. [Abram] allows himself to be expansive, sentimental, and more than a little mad. . . . His book is transformative, animated by piercing observations and hallucinatory intensity.” —Bookforum

“This startling, sparkling book challenges the technological temper of our times by returning us to the animal body in ourselves. Abram shows brilliantly how this body brings us back to Earth in a series of acutely moving descriptions of its polysensory genius. An original work of primary philosophy, it is written with verve, passion, and poetry.” —Edward S. Casey, author of The Fate of Place: A Philosophical History