True Blue: The Dramatic History of the Los Angeles Dodgers, Told by the Men Who Lived It (Paperback) 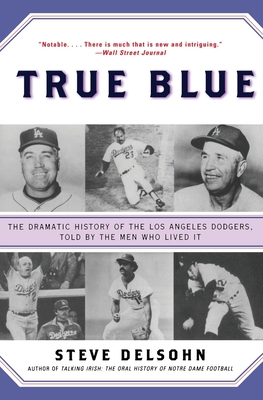 In 1957 the Dodgers broke the hearts of blue-collar Brooklyn for the embrace of booming Los Angeles. Thus began a new era for the fabled Bums, whose exploits inside -- and outside -- the white lines have intrigued generations. A fascinating and colorful history of a team, an era, and baseball itself, True Blue is must reading for any baseball fan.

Based on scores of fresh and exuberant interviews, True Blue brings you into the dugout and the locker room, capturing the nearly half-century of clutch performances, World Series triumphs, blown pennant races, clubhouse brawls, contract disputes, stunning trades, and turbulent managerial changes -- all with a startling insider's perspective.

Their voices, woven into a rich and fast-paced narrative, bring to life the rise and shocking retirement of Sandy Koufax, Kirk Gibson's dramatic 1988 World Series home run, the controversial trade of Mike Piazza, and so much more. It is the vivid story of how the Dodgers became one of the great successes in major league history, winning nine National League pennants and five World Series championships.

A fascinating and colorful history of a team, an era, and baseball itself, True Blue is must reading for any baseball fan.

Steve Delsohn has written several acclaimed books about sports, including the New York Times bestseller Out of Bounds with NFL great Jim Brown. He is the author of two previous oral histories, The Fire Inside: Firefighters Talk About Their Lives and Talking Irish: The Oral History of Notre Dame Football. Delsohn is also a correspondent for ESPN television. A native of Chicago, he now lives in Thousand Oaks, California, with his wife and three daughters.