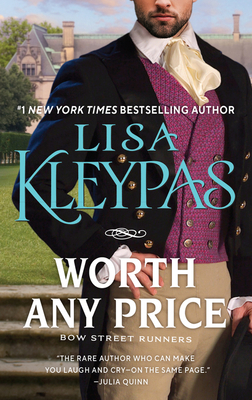 This is book number 3 in the Bow Street series.

New York Times bestseller Lisa Kleypas delights in the third book in the Bow Street series, an enthralling and steamy romance about the most seductive and dangerous rake in England tasked with finding a runaway bride—but when he finds her, will he be able to keep his feelings in check?

Nick Gentry, the most seductive and dangerous man in England, has been sent to find Charlotte Howard, a runaway bride who has disappeared without a trace. But when he finds her, Nick is stunned by the intensity of his attraction to the elusive young woman whose adventurous spirit matches his own.

Determined to escape a forced marriage to a man who will destroy her, Charlotte agrees to an audacious bargain . . . she will become Nick Gentry's bride. But soon she discovers that Nick has secrets of his own, and it will take all her wits and stubborn will to tame his tormented soul.

In the desperate quest to protect Charlotte from the diabolical aristocrat who threatens her, one thing becomes clear: to save the woman he loves, Nick will take any risk . . . and pay any price.

Kleypas continues her winning streak with a thoroughly engrossing crossover between her Regency Wallflowers series and Victorian Ravenels novels...fans of both series are sure to rejoice in the tender love story. — Publishers Weekly

“Another breathtakingly romantic and exquisitely sensual love story that is deftly enhanced by the author’s graceful prose and flair for nuanced characterization.” — Booklist

“Devil in Disguise truly stands out thanks to Kleypas’ masterful blend of blazing ardor and tender yearning. Readers will bask in this lovely romance that hits every emotion just right.” — BookPage

“The novel abounds in the vintage pleasures of Kleypas' writing: finely-drawn characters; a tactile, sensuous style...; banter...; dual points of view...; moving moments of familial ties; and glimpses of couples from other novels to assure us that love lasts forever. Undemandingly pleasurable and guaranteed to go on the reread shelf.” — Kirkus Reviews (starred review)